January. It is surprisingly cold in Taipei as I exit my no-frills airline plane. I hop on a long-distance bus and head south from Taoyuan International Airport. Along the way we pass the Tropic of Cancer, crossing the boundary between the subtropics and the tropics. The further south we go, the more intense the sun feels. My destination is Tainan, a city in the south of Taiwan. Even in January, the coldest month of the year, the city is bathed in warm sunlight, sending the daytime temperatures well into the 20s. I am in no doubt that my spirits, which have been sagging due to the harsh Japanese winter, will only rise in the days ahead…
As a result of showing my work last year at the National Taiwan Museum of Fine Arts, I had been invited to take part in Next Art Tainan, an event sponsored by Tainan City. You might imagine that government-sponsored art events are either large-scale international exhibitions or small-scale local projects, but Next Art Tainan is neither of these.
A new award in only its third year, (1) Next Art Tainan is organized as an art festival in which exhibitions by recipients are held at an art fair (Art Tainan) as well as at various art spaces across the city. This year, a program inviting overseas artists has been included for the first time, as a result of which solo-style exhibitions by four overseas artists are being held alongside the exhibitions featuring the work of artists who received awards in the competition.
Having been invited to participate as part of the quota of “foreigners,” I worked out a plan after conducting research in the city over a period of ten days in January, returning to Tainan in early March for a month-long residency during which I produced work and put together the exhibition. 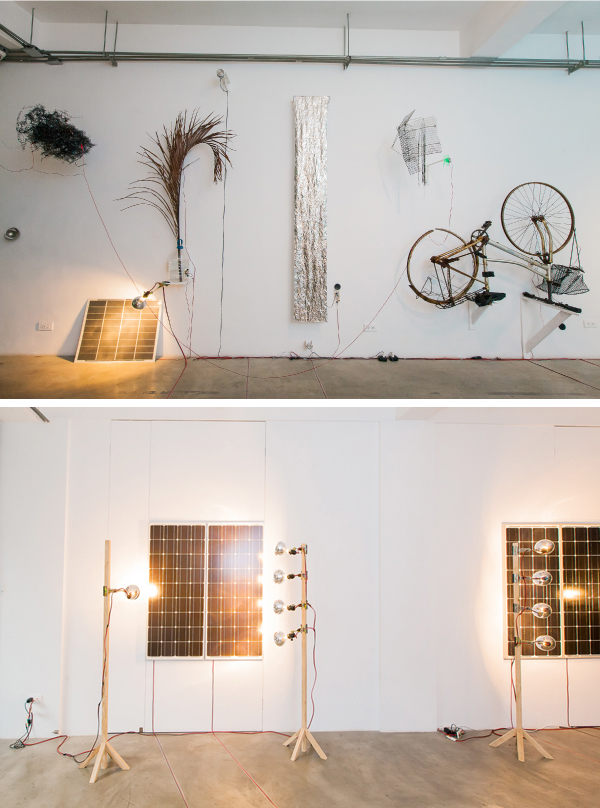 I will provide an account of my research at a later date, but for now I would like to describe the exhibition itself. It involved displaying on a wall objects – including a pane of window glass, a bicycle, a mousetrap, an aluminum sheet, a palm leaf, a tangle of metal wire, and a metal bowl – that I had either found on the street or at flea markets in Tainan or temporarily borrowed.
On the wall opposite were installed two solar panels, beside each of which were positioned several large light bulbs. Each of the light bulbs turned on and off repeatedly at a regular pace, with the solar panels producing a minute amount of electricity whenever these light bulbs were illuminated.
The energy produced was fed via wires to the opposite wall, where small motors and amps caused the objects to move slightly and amplified the sound produced as a result of this movement. Together, these objects, all of which had a history of some kind on the streets of Tainan, made up an “ecosystem” in the form of a network of energy. 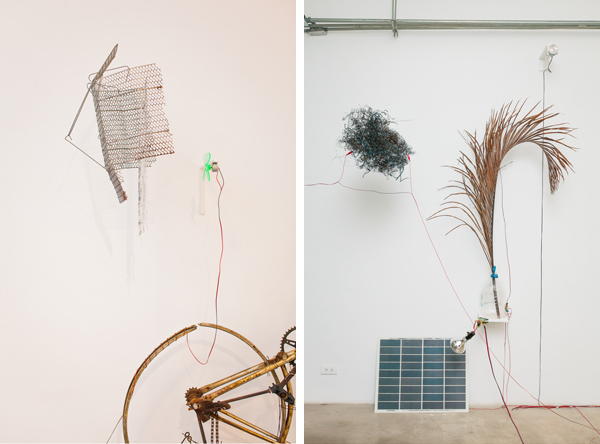 The objects were collected in the course of my research on the streets of Tainan. As I walked around the city, one thing that struck me was the number of areas seemingly unmanaged by humans and the number of objects scattered here and there. Houses abandoned and crumbling into decay and objects (bicycles, motorcycles, chests of drawers, chairs, sewing tables, etc.) apparently no longer in use. These existed not on the outskirts of the city but in areas in the middle of the city right near where people went about their daily lives. Plants had sprung up from openings in areas only recently vacated by people, and the same areas were also occupied by objects that no longer served a function. 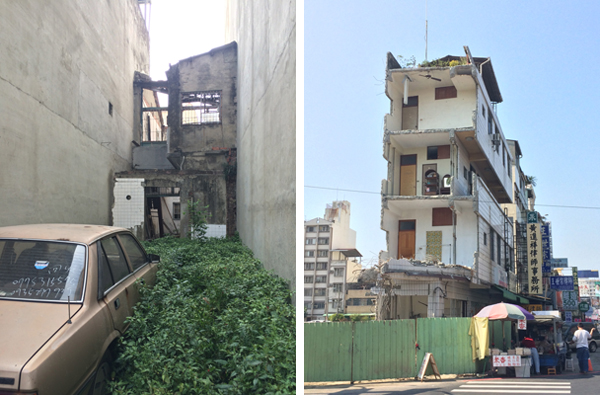 Left: A ruin in the city, where plants have sprung up, with an abandoned car.
Right: A building missing an outer wall, the furniture in the third-floor flat still in place. A veritable Gordon Matta-Clark! 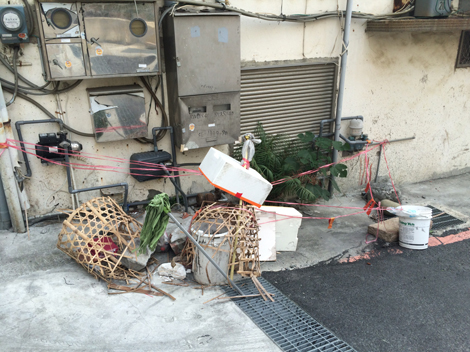 Various objects form complex relationships to one another and at the same time a single constellation.

At some point while observing this situation, which continued to hold my interest over time, the term “micro ruins” came to mind. In Japan, there are any number of ruins that have become “noted places,” and there are even ruin enthusiasts. What attracted my attention here, however, were not these kinds of imposing monuments but small-scale ruins within the confines of the city. Included in this are not only structures but objects. Such objects that have yet to be disposed of despite no longer serving a function and remain close at hand, occupying certain places, can, I think, be described as “micro ruins” that have slipped out of the grasp of human supervision.
Let me give an example of a micro ruin that is directly related to the exhibition. While walking around the city, I came across a rusting bicycle on the street between a small shrine – in Tainan there are various shrines of all sizes throughout the city that also serve as community focal points – and a store specializing in herbal medicine. 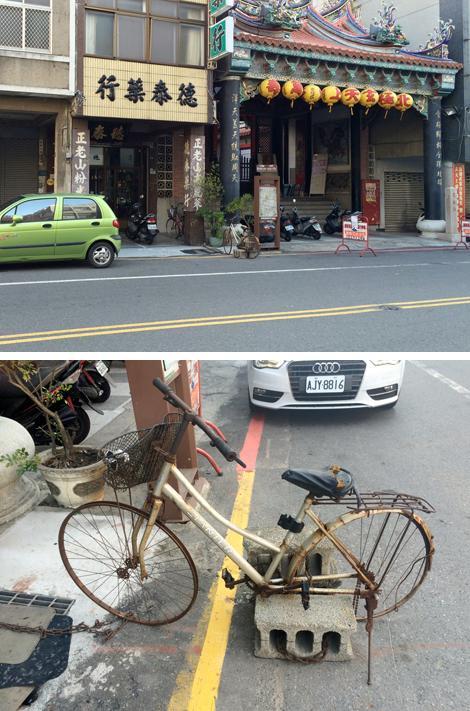 Abandoned bicycle on the street between the medicine shop and shrine.

Because the presence of this bicycle was of great interest to me, I asked the owner of the herbal medicine store to whom it belonged if I could use it as material in my exhibition, but sadly he refused. I left without pursuing the matter further, but the reason given by the elderly owner left an impression on me. The bicycle was wrecked and the owner had no intention of using it, but he wanted to leave it where it was. Because, he said, it had been left there for a long time. It was almost as if there survived between the owner and the bicycle that he would never again use “something resembling” a relationship.
But the story didn’t end there. I had borrowed a bicycle from the municipal authorities to use during my stay in Tainan. I revisited the storeowner and suggested exchanging this bicycle for the one next to his store for the duration of the exhibition, to which he agreed. Apparently the bicycle had not been moved at all for several decades, and so my actions brought about a change, albeit it minor, in the world of the local residents that had not changed once during this period.
After I mentioned this part of my research at the exhibition’s opening talk, Gong Jow-Jiun from Tainan National University of the Arts made the fascinating point that my approach to the city may be related to modernology, and that micro ruins may be defined not just by their size, but also by the mobility of the ruins. On March 11, four years after the Tohoku disaster, ASAHIZA, a film directed by Fujii Hikaru, was screened with the support of the Fukushima honyaku keikaku at the Chuan Men Theater, where handwritten signs are still used. Together with Dr. Gong I attended the talk session following the screening, where, perhaps partly due to the peculiar atmosphere of the venue, the discussion took a particularly stimulating turn. 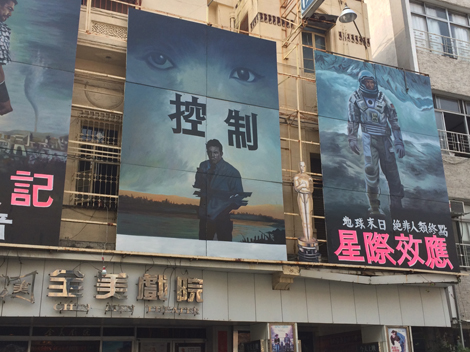 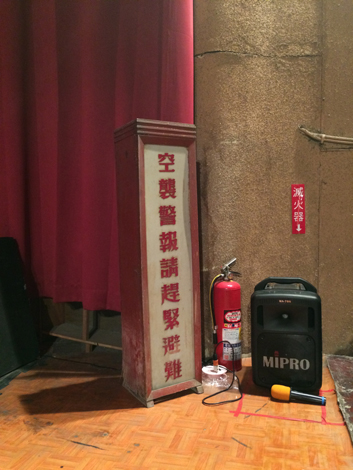 Beside a movie-screen stands an old sign once used to make air-raid
warnings.

Some people from National Cheng Kung University attended the opening of my solo exhibition, and afterwards I was invited to give a talk about the exhibition at the university. (2) This is a prestigious university that ranks among the top three in the whole of Taiwan, boasting a truly spacious campus despite its location in the heart of the city. The branches and leaves of several massive Malayan banyan trees provide shade in which students can rest. The trees were planted in 1923 when Taiwan was ruled by Japan, apparently by Crown Prince (later Emperor) Hirohito, and it is strange to think only a hundred years have passed since then. Looking at them, one gets a keen sense of the intensity of the sun. 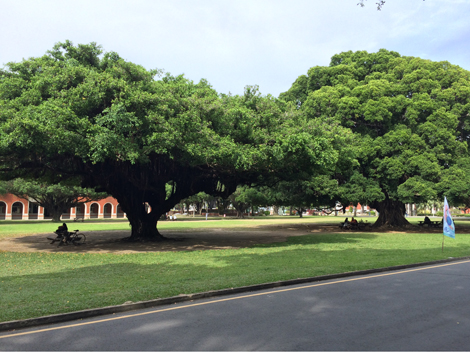 Recently, the number of flights between Japan and Kaohsiung has increased, making it easier to fly directly to southern Taiwan. Whenever I am asked when is the best season to visit this area, without a moment’s hesitation I say winter. Just four hours away by plane, this part of Taiwan is a world away from Japan’s long, harsh winter.
Bathing in the afternoon sun that shines down on Tainan Park with its luxuriant stands of tropical trees, drinking pineapple juice at the base of a bougainvillea in full bloom, admiring the gentle, flexible movements of people diligently practicing Tai Chi, and setting off to observe the city – a city where jumbles of objects and plants fill spaces right beside where people go about their daily lives.
—

1 Taiwan has several government-sponsored art awards, the best known of which are the Taipei Arts Awards and the Kaohsiung Awards.
2 A report on the talk appears here (in English)
http://news-en.secr.ncku.edu.tw/files/14-1083-136546,r614-1.php?Lang=en