In spring we met again, for the first time in a long while.
The 48th floor hotel room I occupied had large windows with a view over the city, and on clear days a diminutive Mt. Fuji could be seen far in the distance, beyond the cluster of high-rises. On rainy nights, the windows were shrouded in smoky gray cloud, obscuring any hint of the vista outside. The city lights shone through this cloud, creating a large patch of white-ish gray that hung, suspended, just at the windows, in what one would expect to be a pitch-black room. Silently we drank in this exquisite sight.
The next day she sent me the following message: “To me it feels that the present never becomes the past, the two continuing to exist in the body simultaneously, and likewise the present of talking with you in that room on the 48th floor also refuses to be consigned to the past, seeming to linger with me physically ever since.” “She” was the novelist Asabuki Mariko. In a discussion the previous day Asabuki-san had also commented on my works that despite having many beginnings, have no end. By pure coincidence this matched the title of the first work I presented publicly. From that point on, our conversation truly took off. To compound the coincidence, the person organizing the exhibition suggested this for its title.
My works are always accompanied by change. Being made from naphthalene – also an insecticide – they start to sublime at room temperature. That is, my sculptural pieces lose their shape over time. Many who see these morphing forms refer to my work as “vanishing art.” Catchy and easy to remember though this may be, in reality they are not vanishing, but simply recrystallizing in the same space, making the connection to a new form. Thus at this show I felt an urge to communicate my concept properly. My works may indeed have beginnings but no end, but at this point, I longed for nimble words with neither beginning nor end, because for me, the world was something that looks fleeting and yet is in a constant state of flexible flux, maintaining its equilibrium. 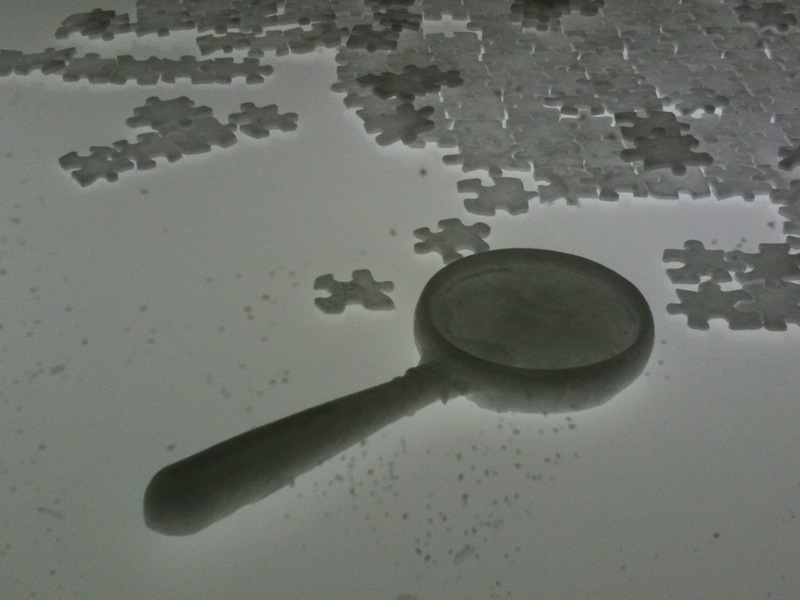 Our friendship grew, and a piece of advice turned up in my mailbox as I floundered in the vortex of the title curse. If, she said, I were to elaborate on that sense of “no ending” the result would be something like “forever” or “wherever.” And having deduced that such words would not sit well with me, she had added a comment by Xenakis that she uses as a kind of talisman phrase, “the ‘here’ is also two billion light-years away,” concluding the message by saying these were the words she imagined one would come up against if one were to expand on the sense of having a beginning but no end. In reply I wrote to her that indeed, for me the past is never over. A few days then passed, but still a good-luck phrase did not come out of me.
The computer is a handy beast, that helps me escape. Studying a pile of photos I’d taken, I decided to set out on a “journey.” Actually this year I’ve traveled to South America several times, driven by a desire to discover what lies on the reverse of the Japanese landscape. Peru, Bolivia, Argentina… faced with natural wonders that a phrase like “the origins of the planet” doesn’t even begin to encapsulate, I was excited by the difference between armchair travel and the real thing. I encountered searing daytime heat; in the mountains, cold that numbed the limbs as blood pressure plummeted, and the tang of the prairies. I traveled by jeep to an altitude of 5500m to cross the border from Peru into rainy season Bolivia and the salt flats of Salar de Uyuni. Here lies a vast salt lake, 3500m above sea level. Striking me as similar to my works, it was a place I’d long wanted to visit. A naphthalene sculpture encased in clear resin has no contact with air, and so lies quietly slumbering without subliming. If one day someone were to remove the seal, the sculpture would slowly evaporate, starting from the exposed section, eventually leaving only a semitransparent trace of the original; thus the title Waiting for Awakening. Thinking of its similarity to my work, I imagined this salt flat could be described as a fossilized ocean, in the process of being placed under seal.
On the reverse side from Japan millions of flamingos formed a pink lake, and in a rainy season Salar de Uyuni, a sky could be found on the ground.
Early summer, and the title for the exhibition had still to be finalized. I was joining students from my old school to gather fragrant orange osmanthus leaves for a work titled Beginning of the Landscapes. The work required a large quantity of cuttings, so students were going out to different tree locations they recalled to ask permission to clip leaves. Occasionally one would get on famously with the owner of the tree, and end up being invited to stay for tea. Gathering the leaves we noticed that even foliage from this same species of tree differed in thickness and appearance according to where the tree was growing. On closer observation the veins of the leaves morphed fuzzily into a Google Map, complete with miniature towns. When the veins were viewed as waterways, the scattered mountains and sea seemed to be paying homage to each other via the rivers. In autumn the 125,000 orange osmanthus leaves formed a huge map 30m long, alert to faraway vistas.
If merely in pursuit of a phenomenon, sculpture does not require a form. But I prefer to focus on the little beginnings that flow through the everyday life surrounding me, and feel the presence of a giant bird’s-eye-view world that morphs yet maintains equilibrium.
I then found my talisman phrase, staring me in the face.
I’m not very good at drawing pictures, and when thinking about a work, draw in my own peculiar fashion, by mirror writing. This way the idea avoids being pulled along by the meaning of the characters, the characters gain their freedom, and my vision is allowed to take flight. I also like that it is difficult to read. One day, when there had been various things happening, on impulse I penned on a piece of paper the characters 空中meaning “sky” or “emptines” and “middle” or “inside.” Where is “inside the sky”?
Together these characters usually refer to the area above the ground. It struck me that they expressed a place that is there, yet perhaps not, so after 空中 I added 空 in mirror writing. Even if read from the back of the paper this is 空中空. Write 空中空 and suddenly both above and below ground cease to exist, the character for “middle” forming a boundary and the respective realms achieving equilibrium. The clouds in the windows, Xanakis, and the landscapes I had seen all somehow connected, and a calmness descended upon me. But how to read 空中空? As XX-naka-sora. Let us make 空中空 neither “sky” nor “emptiness” but all the places going round and round, ever-changing.
(Originally published in Japanese in the November 2012 issue of “Shincho”
English translation: Pamela Miki Associates)

Miyanaga Aiko’s exhibition Naka-sora runs from October 13 to December 24 at the National Museum of Art, Osaka.