Another narrative – In the blank space of “Abstract Art as Impact”: Okazaki Kenjiro

The Toyota Municipal Museum of Art’s collection includes just one example of American Abstract Expressionism. “Abstract Art as Impact” takes this blank space in the museum’s collection for a place untouched by the history of art that was shaped in post-war America, and by rediscovering the impact of abstract art during the developmental stage of Modernism at the start of the 20th century, prior to it being simplified and forgotten in the midst of this discourse, and tracing its progress on a global scale, not across the Atlantic Ocean (i.e. from Europe to the U.S.) but from west to east (i.e. from Eurasia to the Pacific Ocean via Japan), it shows in detail the generous reception of Modernism and its development in pre-war Japan.
If the appeal of this exhibition lies only in the rediscovery of the alternative Modernisms that flowered in the non-Western world, then a global approach to displaying work not biased towards Europe and North America such as that applied in recent years to permanent displays in the Tate Modern is becoming the norm. And even if the aim of the organizers was to go beyond such historical re-evaluations and to reinterpret Modernism, if this amounted to a revision of the critical theory of Rosalind Krauss and other members of the post-Greenberg generation, who are seen as having criticized earlier understandings of Modernism as represented by Clement Greenberg (visual supremacy) by incorporating psychoanalysis, semiotics and gender theory (non-visual elements), then how original would it be? Fortunately, “Abstract Art as Impact” is neither simply a rediscovery of history nor an exercise in anti-visualism. And precisely because of this, the reinterpretation of history involving the resetting of the abstract concept that was distorted in post-war America and U.S-controlled Japan, and its reconnection to the impact of abstract art that was generated in the period from Dada to early collage and construction stimulates from the ground up the thinking of every individual who visits the exhibition. The essence of this exhibition lies in what each person writes in this vast blank space.
At the Shiotani Teiko exhibition held around the same time at the Shimane Art Museum, one could discern a similar narrative with respect to the history of photography in Japan, with the acceptance in pre-war Japan of global Modernism being forgotten after the war in the shadow of American photography. (1) What I want to try to detail here is how the same forgetting – the same discontinuity between pre-war and post-war – occurred in the U.S. 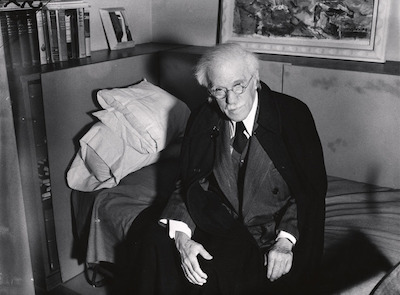 Alfred Stieglitz as he appeared in his later years, when he had become a reclusive aged wanderer.
Weegee, Alfred Stieglitz in the office of his gallery, An American Place, New York (1944)

Firstly, let us remind ourselves of the nature of Clement Greenberg’s “visual supremacy.” Below are a number of famous statements on this subject.


The flatness towards which Modernist painting orients itself can never be an absolute flatness. The heightened sensitivity of the picture plane may no longer permit sculptural illusion, or trompe-l’oeil, but it does and must permit optical illusion. The first mark made on a canvas destroys its literal and utter flatness, and the result of the marks made on it by an artist like Mondrian is still a kind of illusion that suggests a kind of third dimension. Only now it is a strictly pictorial, strictly optical third dimension. (2)

Those racking their brains at this point will be unable to see what Greenberg sees. It is the “layers” that still today comprise the fundamental units of image processing software. As a result of “[t]he first mark made on a canvas,” a layer appears between it and the support surface (which is why it is called three-dimensionality), and the whole is transformed from simply the surface of an object to a picture plane, which is to say its “literal and utter flatness” is destroyed. This is also the glassy surface of water exposed by “The Later Monet” through the addition of water lilies. The only things visible are the reflections of the sky, the clouds and the trees on the surface of the water and the water lilies themselves, but between them the surface of the water (i.e. a layer) appears. In other words, to borrow the words of Marcel Duchamp, layers are phenomena inside the brain (“grey matter”) and not “retinal.” Greenberg’s strictly visual surfaces are the invisible surfaces that form in the brain. His visual supremacy is layer supremacy.


[…] thus a stretched or tacked-up canvas already exists as a picture – though not necessarily as a successful one.(3)

Because the essence of painting is layers, and because these layers are not real but phenomena inside the brain, if one makes the effort (“heightened sensitivity”) one can see them even on readymade white canvases. However, such pictures depend 100 percent on the brain of the viewer, and because it is not the artist but the viewer that turns them into pictures, they cannot be called successful paintings. (4)
Originally, layers were things like the projection plane of perspective (Leonardo da Vinci’s “pane of glass”), the wall onto which an image is projected in a camera obscura, and the screen onto which a film is projected. These are regarded as the base surfaces in “dioptric arts.”


[…] there will still be representation for so long as a subject (author, reader, spectator or voyeur) casts his gaze towards a horizon on which he cuts out the base of a triangle, his eye (or his mind) forming the apex. […] The scene, the picture, the shot, the cut-out rectangle, here we have the very condition that allows us to conceive theatre, painting, cinema, literature, all those arts, that is other than music and which could be called dioptric arts. (5)

Photography is a medium from which the “subject” has been erased. Greenberg also realized that as base surfaces of visible images that exist without presupposing a subject, layers are essentially photographic.


In 1910 Braque had already inserted a very graphic nail with a sharp cast shadow in a picture otherwise devoid of graphic definition and cast shadows, Still-life with Violin and Palette, in order to interpose a kind of photographic space between the surface and the dimmer, fragile illusoriness of the Cubist space […] (6)

Collage is a process of causing previously invisible base surfaces (water surfaces, layers) appear through the addition of extraneous material (water lilies, nails, pieces of paper, a stroke of a pen, etc.). Because this process is also performed on surfaces that have already appeared, collage is also a process of successively superimposing new layers.
Cubist painting can be thought of as the collaging of layers, but as is well known, Colin Rowe distinguished between the two conditions of “literal transparency” and “phenomenal transparency.” In the former, the hierarchy of the overlapping layers is maintained, and the picture plane as a whole appears as a formation of transparent layers (“photographic space”). “Layer supremacists” come to a standstill at this point and become absorbed in the “strictly optical third dimension” that has appeared. In the latter, the hierarchy of the layers is jumbled, and instead of the appearance of transparent stratified space, transparency is derived from the simultaneous existence of mutually contradicting layers. Here, the issue is not collage as the reduction of things to layers, but collage as a process of disturbing the polymeric relationship of layers.
Now, if we were to express in photographic terms the addition of new layers, or new frames, to a given situation, it would be the process of capturing a given world with a new frame and focusing on something within in (inserting a focus plane, i.e. a layer). In the 1910s and 20s, photography entered the age of Modernism with the likes of Stieglitz’s Camera Work and 291 gallery as platforms, and under the influence of Picasso, Braque, Duchamp and Picabia. During its developmental stage, Modernist photography consisted of pictorial photographs that had been transformed by the “abstract impact” of Cubism and Dada. Photographers are subjects who transform the ever-changing outside world into a process of collage, and the resultant photographs (i.e. collages) are the “objective correlative” (T.S. Eliot) or equivalent of these subjects. 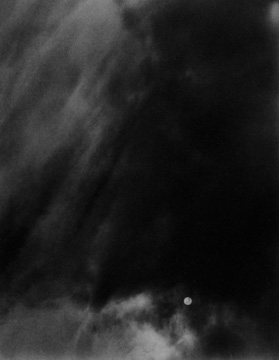 “Equivalent” (1925),one of many photographs of the sky taken by Stieglitz.

However, just as collage lost sight of its essence in the form of “the continual renewal of the base surface” and degenerated into composition consisting solely of the distribution of various elements upon a single flat surface, in the 1930s and 40s the essence of Modernist photography was forgotten. For a start, the process nature of collage and the one-time-only nature of photography were incompatible. From the “Equivalent” series in the late 1920s to the photos of skyscrapers outside his apartment window in the 1930s, Stieglitz tried to concoct a kind of process nature by continually photographing the same subjects as series, but together with the rise of Surrealism and documentary photography, photographers would come to a standstill at the point of the one-time-only “appearance of latent base surfaces.” The world came to be stratified into reality and surreality (literal transparency), the base surface to be called “the hidden surreal world,” and the mission of the photographer to be to “document” the “world as it is” as it appears in “decisive moments.” And so it was that the realism = surrealism discourse became predominant. After the war, in the 1950s and 60s, when Modernism in photography came to be redefined by MoMA’s John Szarkowski as realism with Eugène Atget and Walker Evans’ American Photographs as ideal types, there was no longer a place for the photographic “impact of the abstract.”

1. Shimizu Minoru, “Modernism in San-in,” Bijutsu techo, June 2017.
2. Clement Greenberg “Modernist painting,” in The Collected Essays and Criticism Vol. 4 (University of Chicago Press, 1995), p. 90.
3. Clement Greenberg “After Abstract Expressionism,” in The Collected Essays and Criticism Vol. 4, p. 131-32.
4. Duchamp used not white canvases but readymade glass as true “transparent base surfaces.” The Large Glass could be regarded as a readymade aidé in which curious images have been added to this base surface. According to Duchamp’s dichotomy of “apparition” and “appearance,” an apparition is a mold that generates an appearance, “But this mold of the form is not itself an object, it is the image in n-1 dimensions of the essential points of this object in n-dimensions.”Marcel Duchamp, in Marcel Duchamp: Artist of the Century, ed. Rudolf Kuenzli and Francis Naumann (Cambridge: MIT Press, 1990), p. 170.] In other words, curious “images” as three-dimensional molds for pure paintings that “appear” in four dimensions are placed on readymade glass panes as “layers.”
5. Roland Barthes “Diderot, Brecht, Eisenstein” in Image Music Text, trans. Stephen Heath (New York: Hill and Wang, 1977), p.70, 71.
6. Clement Greenberg “The Pasted Paper Revolution,” The Collected Essays and Criticism Vol. 4, p. 62.

Shimizu Minoru
Art critic. Author of Hibi kore shashin (Everyday this photography) and Pururamon – tansu ni shite fukusu no sonzai (Pluramonity – on the existence of plurality in the mono), among others. Has also contributed texts to English-language exhibition catalogues and monographs for artists including Daido Moriyama, Hiroshi Sugimoto and Wolfgang Tillmans.