“The depth and breadth of expression through objects,” “the unconventional world of art objects,” “the power of regeneration”: phrases such as these suffuse the explanatory notes for “Born Twice,” a joint exhibition by Okazaki Kazuo and Onishi Nobuaki at the Kyoto City University of Arts Art Gallery. Okazaki Kazuo is certainly perceived as a an “object artist,” and his concept of “Gyobutsu Hoi” or “Object Supplement” is linked to ideas surrounding art objects. Onishi’s works are also constructed mainly from materials such as resin and acrylic, but in that they take the form of pencils, oil drums and glasses, do resemble objets d’art. Yet this term objet or object, convenient but unclear in meaning; this word that is somehow summoned up when we see a “thing” before us as “art,” just doesn’t quite seem to fit the works of this pair. This is due to the substantiality of “object” possessed by the term objet. In the practices of both Okazaki and Onishi, what we must observe closely perhaps is not the art object itself as a thing of substance, but the void in this world born out of the presence of the object’s physical extension; a subtle, quiet, almost imperceptible change, yet a fissure that is unmistakably there, through the intermediary of the object. 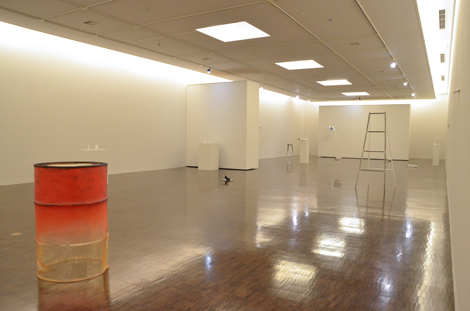 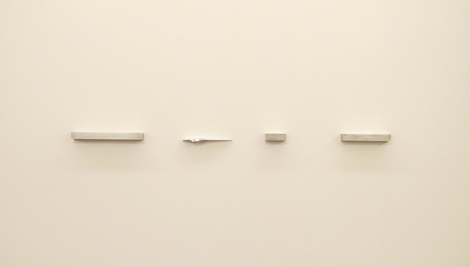 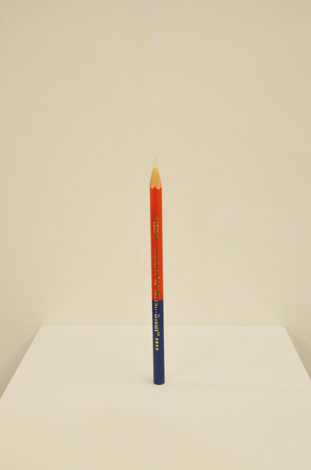 Thus if Okazaki and Onishi have anything in common, it is not the bearing of their objects as substance, but that their works have molds as their base. If we persist in taking an object view, it would be reasonable to describe these two artists as on the same level not so much in terms of the appearance of their objects, as of their apparition. Okazaki injects materials such as plaster into hollow objects, splitting/melting the exterior material with that heat, and extracting the hollow in a single mass. Onishi, whose origins are in printmaking, takes copies made by printing and renders them in three dimensions, molding the object and pulling its “shape” out of the female mold. In both cases, the objet that appears “as a result” is identical to the original body. Yet because they are identical, they are different to the original object. Because the object in this world becomes the mold, false and true, inside and out, back and front, concave and convex are switched, and this world keeps flipping around. What emerges from this inversion is not an overturning of the world, but the possibility of a world unable to be detected through the original object in isolation: what Duchamp once referred to as inframince. 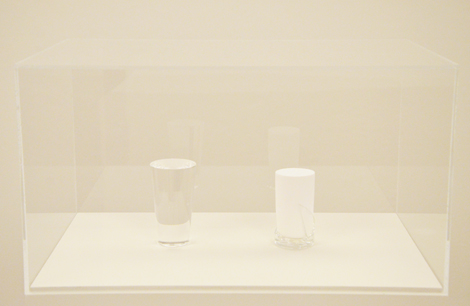 Inframince is a term coined by Duchamp that in Japanese has usually been translated as the equivalent of “ultra-thin,” but in fact does not mean extremely thin, but far below (infra) thin (mince). In other words, it refers to a difference or delay so subtle that people cannot even perceive/recognize it as “thin.” It is something that can only be glimpsed as an effect such as a thing remaining or a deferral, like the warmth of a chair when a person has stood up, the sound generated by trouser legs rubbing together, or the dual odors of cigarette smoke and the mouth from which the smoke issues, and possesses no innate substance.
This condition of inframince (infra-thin) is intimately linked to the migration that emerges when a thing is passed through a mold. Duchamp, for example, wrote that inframince (infra-thin) is when maximum (?) accuracy has been obtained in the difference (in measurement) between two mass-produced objects (cast from the same mold).
“Two forms cast from the same mold (?) differ only to the value of their infra-thin separation from each other. No matter how alike all ‘identical things’ may be, (and in fact the more alike they are), they will approach this infra-thin separable discrepancy.”
Things cast from the same mold are not “the same” because they share a mold, but “infra-thin” because they share a mold. In the works of Okazaki and Onishi, this “infra-thin” is what emerges at the end of the turning. This inframince phenomenon/effect is probably linked to manifestation of “the possible” latent in a world grasped by the discontinuity of an accumulation of individual bodies. “The possible connotes becoming: the transition of a thing to another thing takes place in infra-thin.” In the same way that Duchamp endeavored to explore the concept of inframince, Okazaki and Onishi attempt to reach out to a reality of hidden possible things unable to be grasped in this symbolic realm segmented by codes. 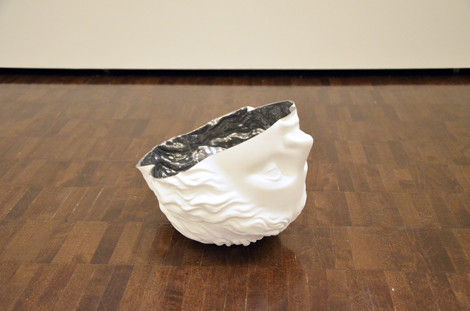 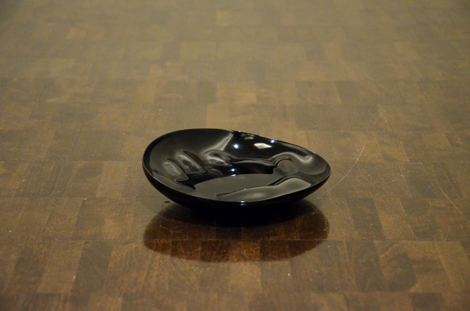 Yet I do not wish to imply that the work of artists such as Okazaki and Onishi is influenced by Duchamp. Personally I believe Okazaki to be one of the few true Duchampians in postwar Japan, but Okazaki arrived at his notion of “Gyobutsu Hoi” over ten years before the release of Duchamp’s notes on inframince. Nor did Onishi arrive at his present methodology through immersion in that of Duchamp’s. It is rather that when it comes to molds and infra-thin, Duchamp occupies the same ground as Okazaki and Onishi. What Duchamp dubbed inframince, Onishi called “vacuum,” and Okazaki “supplement.”
With “Gyobutsu Hoi” Okazaki is not plugging a gap in an object with a different object. By offering an object the same as the object, he is continually compensating for the discontinuity between object and object by an inframince-style separation of the possible. 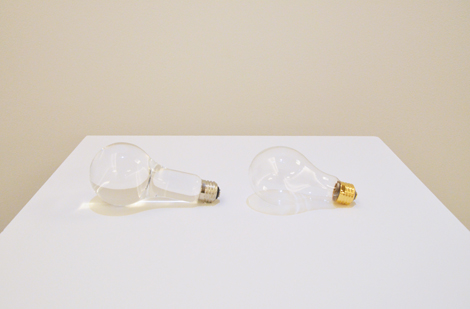 This exhibition is also enveloped in another kind of inframince-style separation: the “actual approximation of similarity” of two artists separated in age by over 40 years. Even those very familiar with the works of both (in fact the more familiar, the more this will be the case) will find themselves at this exhibition faced with settings where the works of one cannot be distinguished from the other. Duchamp wrote that “Two men are not an example of identicity (identicité) and on the contrary move apart from a difference that can be evaluated as infra-thin,” but this pair may be a rare exception.