Tate Modern in London is a former power station converted by Herzog & de Meuron, and there is a view that for better or worse, its gigantic turbine hall has turned into a massive stage on which the stars of contemporary art vie to showcase their most spectacular offerings. Obviously I have not seen personally all these works onsite, but of those I have, a particularly standout example for me was Doris Salcedo’s Shibboleth (2007), created by breaking open the floor of the turbine hall to form a fissure running its length. This is not because it was the most spectacular. On the contrary Shibboleth was a critique of spectacle, focusing on the floor that serves as the setting for spectacle in an attempt to direct our gaze to what lies beneath. In saying this, one should not be too quick to dismiss Shibboleth as just another example of the now-commonplace method of using a crack as an emblem of something impossible to represent. In actual fact, to speak of breaking open the floor would be inaccurate: the crack was lowered into the floor after first paring it out meticulously, to the extent of using delicate equipment such as dentist’s implements. Thus thematically this is not about the crack as anti-spectacular spectacle, but the micro-geology of the crack, and the micro-politics of whether one would be permitted to cross the crack, or not. Needless to say, the title Shibboleth was a key word in the literal sense, that is, a key used to identify members of an ethnic group by whether they could pronounce the word correctly, and then decide whether they were to be permitted or prohibited to cross. 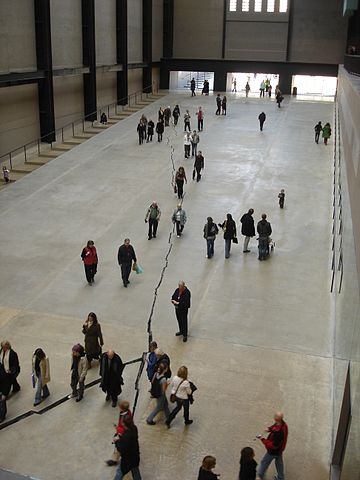 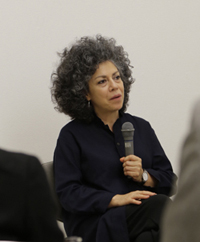 The creator of Shibboleth, Doris Salcedo, was awarded the Hiroshima Art Prize, and on July 18 an award ceremony and opening for the exhibition to mark the award (July 19 – October 13) were held at the Hiroshima Museum of Contemporary Art. The Hiroshima Art Prize, launched in 1989 and awarded every three years, has to date been given to Issey Miyake, Robert Rauschenberg, Leon Golub and Nancy Spero, Krzysztof Wodiczko, Daniel Libeskind, Shirin Neshat, Cai Guo-Qiang, and Yoko Ono. I took part in symposia marking the awarding of the prize to Libeskind and Cai, so perhaps cannot claim to be entirely neutral, but I would say that for this type of award, over the years the judges have selected eminently suitable winners. This means that judging for the ninth prize would no doubt have been far from simple either, but I imagine no one would argue with the choice of Salcedo.
Born in Bogota, Colombia in 1958, and apart from time spent gaining a master’s degree at New York University, having been based almost entirely in her home city, Doris Salcedo is, as she herself declared in the prizewinner’s talk on July 19, an artist who has consistently chosen political violence as her theme. Those holding political power brandish symbols of violence to intimidate people, in what itself constitutes a kind of violence. How can violence be represented in a non-violent way to counter this? How to carry out the at first seemingly impossible task of mourning the victims of violence? Obviously this issue is not one confined to Colombian politics. Political violence continues to create victims the world over, and Shibboleth too was born out of a rethinking of the timeworn challenge of crossing borders, based on the actual problems of migration, now global in scale.
A Flor de Piel (2014), first up in the commemorative show at Hiroshima, is a typical example of such a work. A giant piece of fabric made by sewing together single rose petals (treated to preserve them), it is a floral offering for female victims of torture, and a delicate, ephemeral funeral shroud. At the same time, it is an interface narrowly connecting us to the untouchable bodies of those victims of torture. 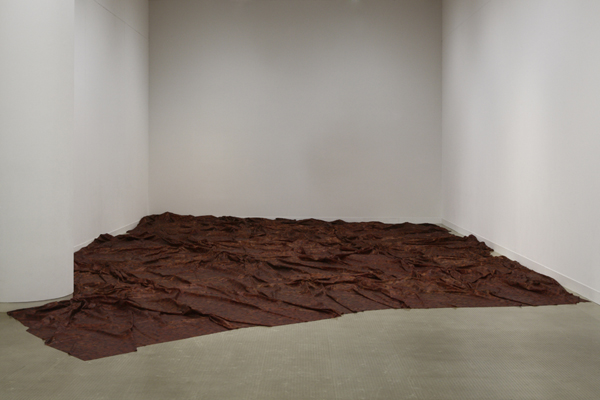 Moving downstairs to the basement we encounter the installation Plegaria Muda (2008-2010) unfolding across the space. Coffin-sized slabs of earth are sandwiched between tables top and bottom, and crammed into the room to form a kind of maze. In Colombia, between 2003 and 2009, 2500 young people in poor areas were killed by the army and treated as “unidentified guerrillas” (an example of “the disappeared” found in other parts of Latin America too). One could say that Salcedo, who accompanied mothers searching for their missing children and attended as bodies were identified in mass graves, drew on the experience to create Plegaria Muda as a sort of graveyard in which those nameless dead could be interred as precious individuals. In fact, taking a closer look while wandering through a maze that appears to be a vast uniform array of anonymous dead, one notices that the tables, which seem virtually identical, actually differ in subtle ways, and the thickness of the soil also varies. An even closer inspection reveals green grass sprouting from their corners, as if to embody a rebirth deemed unthinkable: tentative, yet with an irrepressible force. 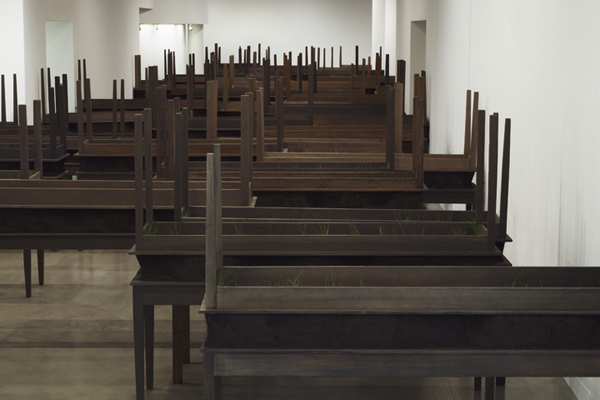 This exhibition, composed mainly of just these two installations, is the complete opposite of exhibitions offering visitors the opportunity to enjoy a wide range of works. But approaching with the requisite fortitude and powers of observation, visitors will draw from it an experience of the most profound sort. In actual fact, a major retrospective featuring most of Salcedo’s works will open at the Museum of Contemporary Art, Chicago next February, with plans to tour New York and Los Angeles. It would be wonderful to see such a show in Japan as well one day. Yet for Salcedo’s first Japanese outing to take the understated form it has here in Hiroshima is surely supremely befitting this particular artist.
Looking back one may note that Hijiyama, where the Hiroshima City Museum of Contemporary Art is situated, was once the location of an army cemetery, and later home to another cemetery as well. Near its summit is the Atomic Bomb Casualty Commission (ABCC) created by the United States after the A-bomb attack, the semi-circular building also depicted in the comic Barefoot Gen still used by Japan and the US as a joint center for research into the effects of radiation. This was the original location of the military cemetery, and it is perhaps not a bad idea to start there and visit the relocated cemetery en route to the Museum. And now, the basement of the Museum has turned into a cemetery, as if Plegaria Muda had been created as a site-specific piece.
Reading my rather inadequate description, if one has only come into contact with her texts and lectures sprinkled with quotes from the likes of Paul Celan, Nelly Sachs, Jacques Derrida and Jean-Luc Nancy, one might get the impression that Salcedo is a speculative sort of artist inclined to negative theology. It bears repeating that this would be a mistaken over-simplification. As already suggested, a close study of her works, which thanks to their very subdued nature, seem uniform in appearance, will likely reveal another, tremendously detailed face. It should be stressed too that off stage, Salcedo is a charming conversationalist. Joined by her partner, the novelist Azriel Bibliowicz, we discussed all manner of topics. These included the author Gabriel Garcia Marquez, who died recently. Garcia Marquez was undoubtedly a great writer. Yet surely his unwavering support for Fidel Castro counts as a major blot on his reputation. In Colombia of course, just as in Japan, the Cuban Revolution was viewed as worthy of embracing, for resisting American colonialist control. However before long it became clear the revolution had done nothing but spawn a Castro dictatorship poisoned by machismo and militantism. That Garcia Marquez still persisted in supporting Castro perhaps suggests that he himself was in various ways in thrall to power (when I said that in Japan disillusion with Castro and Garcia Marquez had set in when people encountered the writings of Reinaldo Arenas,* sent to a Cuban prison for being gay, Bibliowicz revealed that he had met Arenas twice during the latter’s exile in the United States. At that moment, despite the difference in timing, I sensed a certain contemporaneity.) It became clear during such discussions that here was an artist of grace and tenacity who had completed discarded any illusions surrounding the revolutions of the likes of Stalin and Castro, but nevertheless was attempting to organize a new resistance – a non-violent resistance – to the tyranny and violence of a world under global capitalism.
So Doris Salcedo is not one for spectacle, yet nor is she one for melancholy, paralyzed in the face of wounds impossible to represent/the impossibility of representing wounds. She is an actual artist in the deepest sense, who explores the delicate structure of wounds, and though aware that she can never heal them completely, for that very reason employs the most delicate of means to attempt that healing, and by doing so open up, even a fraction, hope for a peaceful life.

Addendum:
I wrote that this exhibition is composed mainly of just two works, however at the beginning photos are displayed of past major works, starting with Shibboleth, thus providing a quick overview of Salcedo’s practice.
Of these past works, let me say a few words on For Hans Haacke and Edward Fry (2009), which was a photographic work to start with too. A Hans Haacke show scheduled at the Guggenheim Museum in 1971 included Shapolsky et al. Manhattan Real Estate Holdings, A Real Time Social System, as of May 1, 1971, a series of photographs of around 150 apartments in Harlem and other low-income housing areas, and documents related to their ownership, but this and another work were deemed inappropriate, the show canceled and the curator Edward Fry, who had supported Haacke, fired from his job. The reason is said to be that among the owners were trustees of the Guggenheim, or others connected to the Museum. In other words, Haacke attempted to bring the hidden reality of backstage at the art museum right up on stage, and was censored for his pains. The work contributed by Salcedo to the Void show organized by Nancy Spector at the Guggenheim after 2009 used apartment photos borrowed from Haacke himself, presented as detailed composite photographs in a way that made it appear as if the apartments had been built, actual size, in the atrium of the Guggenheim. It was a characteristically Salcedo offering, and at the same time, offered insight into which artists she draws inspiration from. In that context, what Salcedo is endeavoring to find below the stage could most certainly not be described as a mere “rip” or “hole” not possible to represent.
One may now recall that Haacke, who was chosen alongside Nam June Paik to represent Germany at the 1993 Venice Biennale, broke open the floor of the main hall of the German pavilion. On entering the door, with a photo of Mussolini and Hitler visiting the Biennale venue together in 1934 below the symbol for the Deutschmark, the floor was covered in cracks under a wall with GERMANIA written on it in huge letters. Salcedo’s Shibboleth also conjures up images of this, Haacke’s Germania. Except that if Germania, if not all of Haacke’s work, is an anti-spectacular spectacle, Salcedo’s is an anti-spectacular non-spectacle. This is what I wanted to say in the main text.

*For more on Arenas see Yoakemae no Reinarudo Arenasu (“Reinaldo Arenas before dawn”), a discussion with Shimada Masahiko and Hoshino Tomoyuki in a special feature on Reinaldo Arenas in the September 2001 issue of Eureka.