Wolfgang Tillmans / “Your Body is Yours” The world’s smaller details, “encouragement” for the out of place

Leaving Okinawa at eighteen or so for vocational college in Osaka and living on my own for the first time, after a while I obtained a PC, connected to the net, and with needless youthful guilt, started searching for gay friends on bulletin boards, gradually building a few online relationships. I had yet to come out to the offline world, and every night would return to my apartment to engage in trifling email and chat conversations with gay people. I felt split between worlds, yet comfortable. Blogs became the fashion among my online friends, and some of the more switched-on started posting on their sites snaps taken with a LOMO LC-A. Inspired, I took the cash saved from my part-time job (at the Osaka Dome restaurant where you can watch the games; as a bonus it happened to be the year Kintetsu won the League championship), bought a LOMO, and night after night stalked my neighborhood of Tanimachi 4-chome, snapping photos heedless of the cost of either film or developing. It was the first camera I had ever handled, and my first encounter with photography, and in turn, art. The developed shots were invariably blurred and unusable. I knew nothing about things like focus or shutter speed, and simply enjoyed taking photos. Opportunities to meet in person people I’d got to know online also began to grow, and a clandestine place for me and them emerged in the midst of my unchanging everyday world. I still remember that sensational feeling, as if a huge weight had been taken off me.
Then one night I went to a club event in Namba with a guy in his mid-thirties (about the age I am now). I was watching a drag queen giving a lip-sync performance, and men on the dancefloor, when as I stood there absentmindedly, too timid to dance, my arm made contact with the sweaty arm of a guy dancing next to me. It was 2001, I think, and I was twenty. Coming out would have been unthinkable at the time. Overwhelmed by the sheer number of gay people, I gazed at the glittering light given off by a mirror ball in a basement club in a part of the city I was living in, Osaka, that usually I would pass by without even noticing, and wondered if I’d ever be able to dance. It was an amazing moment, in which the world rapidly seemed to fragment, and I began to think that perhaps that was no bad thing.
It was steeped in such memories that I made my way through Wolfgang Tillman’s “Your Body is Yours.” Images of people dancing in a dimly-lit club reminded me of that club in Namba. And here I was in Osaka, looking at these photos. What an odd sensation. In his talk on the first day, drawing on Barbara Kruger’s comment that “Your body is a battleground,” Tillmans said of clubbing that dancing in a club is not some kind of direct message, but a form of encouragement, a meaningful act to counter norms and specious ideas of beauty, because people congregating and dancing in this way is utterly meaningless. And it is precisely that absence of meaning, to his mind, that makes it beautiful.
As Tillmans said about the title of the show in his talk, although the body is terrain under the control of the individual to whom it belongs, potentially its freedom can occasionally be limited by some external cause, or perhaps violence. The question becomes one of how to maintain ownership of one’s own body. Contemplating this going round the exhibition, I found among the images some of the world’s smaller details: discarded clothing, views out of windows, the faces of people high on Ecstasy, extraordinarily intimate portraits of famous people in BUTT Magazine, fragmentary quotes from 2channel. And a photo of the SEALDs demonstration that took place in Osaka a few days before the show, taken very close to the action. Like those joyfully clubbing, people in gatherings such as demos and parades are a consistent motif for Tillman’s photos, and this exhibition included several examples. I was reminded of a group of people a little younger than myself standing shoulder to shoulder outside the Diet building a while back, chanting in English “This is what democracy looks like.” Observing their enthusiasm hesitantly from a step behind, I experienced a fresh sort of surprise. It was similar, I noted, to the sensation I’d experienced in that Namba club, the raw vitality of those chanting in the demonstration overlapping with that of those dancers. 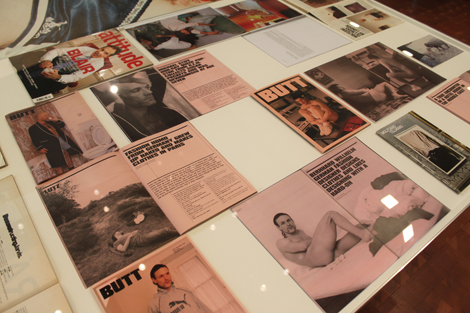 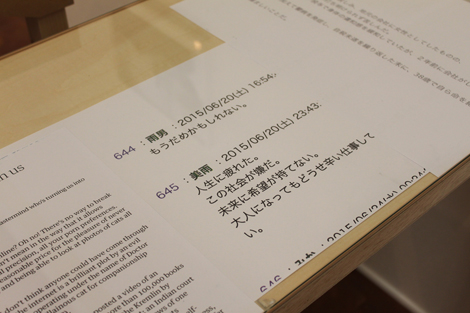 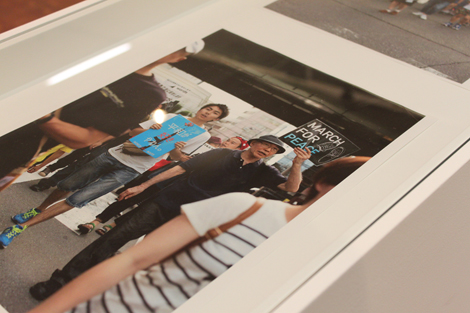 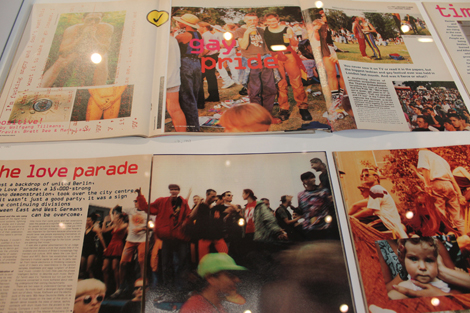 Suddenly the title “Your Body is Yours” made sense. And I recalled Shinjo Ikuo in his book Okinawa no kizu to iu kairo (The circuit that is Okinawa’s wound) writing of the out-of-place, almost instinctively intimate contact with others he felt at a sit-in in front of the gates at Henoko. Writing of what people seek in a sit-in, Shinjo said,


We are determined to seek something out of place, inappropriate. So what out-of-place thing is it that we out-of-place people are looking for? Something startlingly simple: place.
Shinjo Ikuo, Okinawa no kizu to iu kairo (Iwanami Shoten, 2014) 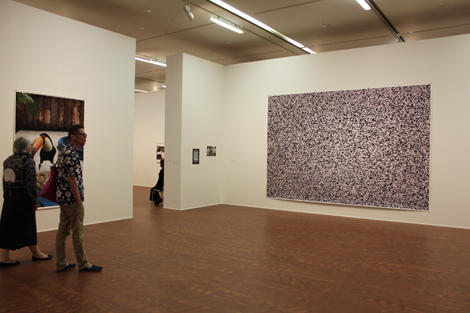 Drawing physically closer to the print End of Broadcast – a shot of the noise or “snow” of a CRT television – colors resembling particles of light began to loom out of the photo. I moved closer to the print, then away, closer, then back, and that liberation I felt at twenty, like zooming from the big world outside up to the individual, was revived. A sensation that can only be described as encouragement, that I felt when the body of someone else touched my own, under the light of the mirror ball, as I stood not dancing while sensing the fever of those who were. I suspect what I in my inability to dance felt then is not dissimilar to what Tillmans calls encouragement. The reception at the museum finished, I headed for the after party in Doyama, which reminded me that come to think of it, while living in Osaka I’d never been to Doyama, in fact Osaka’s biggest gay district. In a tiny, dimly-lit basement club, drag queens, Tillmans, people from the museum, all sorts were dancing. I tried moving my body a little, but soon gave up, embarrassed. Underneath the mirror ball, everyone seemed to be having a great time. I got very drunk, and reeled off shot after shot amid the jumbled light of the club. The next day I found I’d taken 750 photos. Although naturally, most were blurred and of course, unusable.

Scenes from the after party in Doyama (Photo: Miyagi Futoshi)

Miyagi Futoshi Born 1981 in Okinawa, based in Tokyo. After graduating high school, and a stint in Osaka, Miyagi made his way to the United States. While working for the art bookstore Printed Matter Inc. in New York, he began his own creative practice. Returned to Japan in 2007, continuing his creative practice while working for the Tokyo bookstore UTRECHT and taking part in the Tokyo Art Book Fair. His works weave detailed stories out of subjects ranging from his own personal experiences and memories in Okinawa, the US, and Tokyo, to nationality and race, and his own identity in mediums spanning photography, video, objects, and text. His work on view in the exhibition “Time of Others” at the National Museum of Art Osaka (through September 23.)
http://fmiyagi.com/ http://americanboyfriend.com