A review of the Shingu performance of Nichirin no tsubasa, with art and direction by Yanagi Miwa 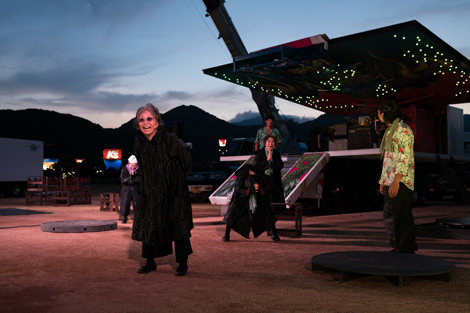 On August 6, 2016, after giving a lecture at Kumano University, my first visit there, I attended the Shingu performance of Nichirin no tsubasa (Wings of the Sun), directed by Yanagi Miwa.
The green space at the Wakayama port of Shingu serving as the “stage” is an artificial slope facing onto the harbor, a superb location with views across to the lights of the main road and suburban big-box stores far away among the hills of Kumano. Being the height of summer, heat was a concern, but as it transpired a pleasant sea breeze came up after sundown, making this the perfect night for outdoor theater. 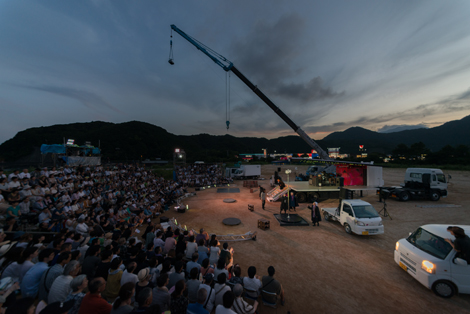 As the play began, the ears of the capacity audience rang with the warbling and twittering of birds, typical of Yanagi Miwa, who has always placed special emphasis on “voices” in her theater pieces. Readers of Nakagami Kenji would immediately have been reminded of his “golden bird.”
Of particular note in this instance was the use of a mobile stage trailer for the set. It is this set that kicks off the performance, and constitutes its core. Fascinated by the unique stage trucks integral to Taiwanese traveling cabaret culture, Yanagi was so determined to use such a vehicle as a theater set that she borrowed money to import one into Japan, and designed the hibiscus backdrop herself. This decorated truck, a wonderful work of art in its own right, was first unveiled at the Yokohama Triennale in 2014. 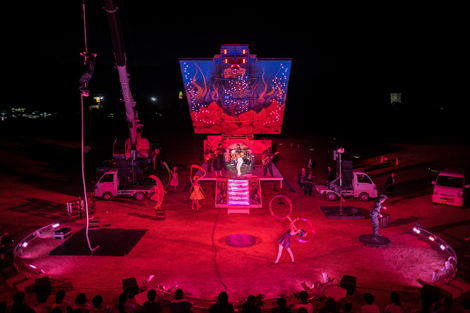 Asked to give a talk at this Triennale, I spoke on Japan’s “Yankee” phenomenon.
What does the term Yankee mean? Put simply, it refers to a uniquely Japanese brand of delinquent culture, and has no direct connection to America or Americans. It is an amalgam of a “bad-taste” aesthetic typified by modified vehicles, “tokkofuku” embroidered clothing, heavily pimped trucks and bicycles, and a “normative consciousness” of overcoming difficulties through the celebration of spirit and solidarity. A more detailed description can be found in my book Sekai ga doyo no yoru no yume nara (If the world were a dream on Saturday night) (Kadokawa Bunko)
What I witnessed at the Triennale was quite literally the flowering of an intoxicatingly beautiful decorated truck. Obviously the original refrigerated trailer was not decked out in this way. However, one of the achievements of Nakagami’s writing was to introduce, for the first time, a Yankee-style reality to the realm of the novel. Yanagi has skillfully extracted/adapted the Yankee element of Nakagami’s work and assembled the most fitting possible set.
To return to the original subject, while Yanagi’s play pivots around Nichirin no tsubasa, at the same time it unfolds with references to the likes of the “last supper” of Nakagami’s Kii Monogatari, and Sennen no yuraku (A Thousand Years of Pleasure). Five elderly women (seven in the original), evicted from the roji (urban alleyways) in which they have long dwelled, climb aboard a refrigerated truck and trailer driven by young fellow “ghetto dweller” Tsuyoshi, and wander the highways and byways of Japan from Ise to Ichinomiya, Suwa to Dewa, Mt. Osore, and finally, the imperial palace. At each stop the old women sing goeika – hymns praising the Buddha – and prepare okaisan rice porridge. The youths meanwhile spend their time chasing women. Once running, the truck becomes a terrifying creature of the night, a phallic devil, and when it stops, it is “the cozy womb of a woman.” In a camping ground amid torrential rain, it crawls around in a circle, and is likened to a “snake going round and round trying to bite its own tail.”
The music by Makigami Koichi is impressive, but the “sibling double suicide” inserted with exquisite timing, and the song Anko tsubaki wa koi no hana (A young girl’s camellia is the flower of love) sung by Nakagami himself, were simply stunning. The performance included not only singing and dancing, but a plethora of elements like pole dancing and acrobats of the sort one might see in a show, at times suddenly transforming the play into something more akin to a musical. A production that would not get off the ground if subjected to a single strong gust of wind was the epitome of carnival-like chaos, flowering courtesy of a perilous balance of a distinctive time and location.

In the past, I have made the following comment on the creativity of Yanagi Miwa.
“Yanagi takes simple concepts and examines them contextually, and when this examining eventually reaches the point of causing a conceptual reversal, keeps on turning and turning. This makes tracing back through her works an exercise in learning to understand the timeless nature of time, the anonymity of proper names, the virtuality of fetishes, the otherness of the self, and the narrative quality of relationships.”
It is no coincidence that the five old women in this play appear to be a reprise of My Grandmothers, one of Yanagi’s best-known works. Yanagi’s cycle of creative repetition is perfectly consistent with the structure of Nichirin no tsubasa; a narrative structure open to the ambiguity of disorder and nobility, indigenous and universal, I-novel and myth. One should add, moreover, that the volatile beauty of her play is underpinned by the fetishistic stage trailer, a work of art in its own right.
The stage trailer is in itself a mobile roji, and also an example of what Nakagami referred to as utsuho (hollowness). Nakagami, born into a buraku community, is mistakenly thought to have been able to write the Kishu saga because of these origins. However as Karatani Kojin points out, in fact it is Nakagami who is “rootless.” The roji to which he refers possess no vernacular reality. Hence the ubiquity of the roji: as a kind of “augmented reality” of fragrant hibiscus and singing golden birds.
Nakagami referred to the roji as utsuho or “borders as zones.” Meaning that they were “spaces” with no simply defined borders, that one could enter, then just as easily find oneself to have exited. In other words, utsuho. This is more than mere chaos. Utsuho is full of the vibrations brought by rival structures: sacred and profane, sex and violence, paternal and maternal – the vibrations of difference. As Nakagami notes, this is the womb of every kind of culture, and at the same time, the source of discrimination.
If one were to attempt to find grounds for the idea that the roji equals utsuho, this would constitute discrimination. Yet to simply render it groundless results in nothing. Repeating expression that seemed to uproot his own roots, while acting as if there are roots, could perhaps also have been the locus of Nakagami’s works. Here too we may perceive a close connection with the Yankee culture, grounded in fake tradition while continually transforming itself through self-parody.
Thus there is no curtain call for Yanagi’s work. A courageous decision, worthy of hearty applause. Once the old women have departed, the trailer swallows up the entire set, and crawls off, leaving the vacant lot left by the disappearance of the roji forever reverberating with Tsuyoshi’s line, “Well, back on the road for us then.” Indeed, the journey continues, the birds tweet, and the story does not end. I was present for the kind of miraculous moment that can only occur in outdoor theater, and grateful to have been able to witness such a moment on this, my first visit to Kumano.
Like Nakagami, Yanagi’s theatrical oeuvre will doubtless continue to evolve. Hopefully one day, I will have another chance to see, in Kumano, where that evolution takes her. 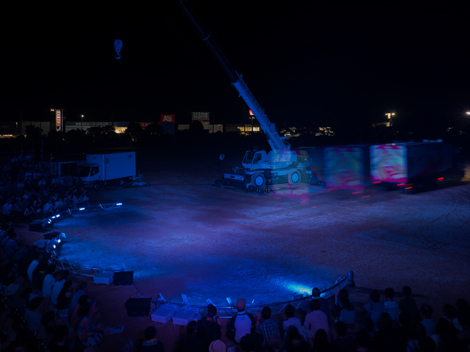