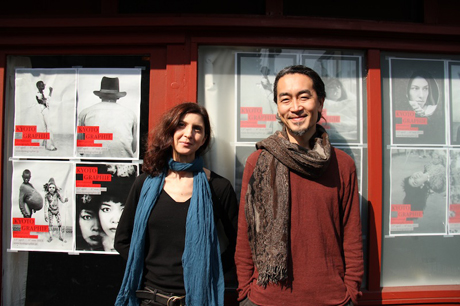 Shock and impact from Arles
– When, how and why did you come up with the idea of organizing Kyotographie?
Nakanishi Yusuke: In 2011, after an exhibition we had in Paris, we went to the Arles International Photography Festival. Lucille had been many times before, but for me it was the first time, so it was a big shock.
– So was it in Arles that you set your sights on doing a festival?
NY: For me, yes.

Lucille Reyboz: For Yusuke it was his first time to be immersed in this open-ended approach to photography. The way they show photography in Arles is quite unique. It is very inspiring.
NY: Japan is a very small island in the Far East, so even when it comes to art we don’t have access to the same information as Europe or the United States. We are quite isolated. In Arles, at this International Photography Festival, people come from all over the world, especially Europe and the US. It is a stage for the photography world. It made me think we also need a stage – an equivalent stage in Asia – where we can communicate and exchange information.
LR: Japan has all these amazing photographers, but strangely they are more recognized outside the country than in Japan. People don’t really appreciate them as artists, so as Yusuke was saying we want to give them a stage and an opportunity to show. We want to introduce Japanese people to these amazing Japanese photographers.
NY: When I was in France, I saw that the average French person naturally buys art, regardless of whether the artist is famous or not. If you like the art, you buy it and display it in your home and enjoy art as part of your daily life. And by doing that you support artists. The French have this cycle. And I thought, “shit, we don’t have this in Japan.” The media and Japanese companies just use artists for advertising.
To be an artist is challenging, right? Lucille and I feel we want to support artists. I thought that’s what we need in Japan – support for artists. Japanese people look at art for free or a small fee, but they never think about buying art and supporting artists. They are just like “okay, thank you, it was interesting,” but they never think about their connection with the artist.
This festival could also create opportunities for Japanese artists to show overseas. After the earthquake I thought, we have to create something in this old Japanese system, in this closed country. We cannot survive in this type of society – in this small life. We have to be open, and that does not mean global, but it does mean international. We have to be very open.
– Although Kyotographie is an art festival rather than an art fair, is there somewhere in the festival where you will sell art works to the public?
LR:  Yes. The festival is made up of two parts: Kyotographie and KG+. Kyotographie will be held at 12 locations, and there will be an entrance fee, and those works will not be for sale. KG+ is our satellite event. KG+ is made up of 30 other smaller locations, and it will showcase emerging photographers. It will be free for the public and the artists can sell their artwork.
NY: KG+ creates opportunities for the overseas audience visiting Kyotographie to see Japanese artists. There will be many cafes and machiyas around the Kyotographie locations where young artists will be showing and selling their art.
LR: It’s not open to just anyone, however, we have chosen high quality photographers to show in KG+ as well.
NY: The quality of Kyotographie is very important. We want to show the quality of Japan. We want to show the very high level of quality of and from Kyoto. We are very careful about the work we show and which organizations and companies we partner with.
LR: We also chose our sponsors very carefully.

Meaning and significance of a photo festival in Kyoto
– What is the meaning or the significance of having Kyotographie in Kyoto? Why is there a need for this kind of photo festival to be organized in a city like Kyoto?
LR: When we started living in Kyoto, we were on our bicycles discovering all these locations and then step-by-step this idea of creating a festival became quite clear. We began to realize that this city was completely appropriate to stage a festival like Arles because of the size, the history, and the amazing locations. Arles is excellent and it became popular because it bridged the distance between the public and the photography and showed photography in historical locations.
We were first inspired to have the festival here because we live here and we were seduced by the charm and the history of the city. In Kyoto, there is a relationship to time, which is interesting and connected to photography. We want to play with that. Additionally, with the diversity of locations and the number of visitors who come to Kyoto, there is potential to bring photography to a large audience.
Kyoto is powerful in terms of spirituality and history. It’s hard to dream of a better city than this as a setting for a festival.
NY: We want to create a real international event in Japan. That’s a big challenge. After the earthquake – after Fukushima – I felt disenchanted with the role of  the metropolis of Tokyo. It’s a big city and everyone comes to this big city, and if this big city collapsed then Japan would collapse. I thought we need another base to keep the country going. Kyoto is the heart of Japan – the heart of Japanese culture. I felt like we could transmit something from this city to the world – directly, not via Tokyo.
– Is there a specific theme to the festival?
LR: For now it’s very open. We didn’t want to limit it for its first edition. We like to think of it as a window to the world, programming for half of the artists to be international – African, European, American, etc – and the other half Japanese.
NY: We hope this festival will take place every year, and we hope to find, little by little, a new direction each year.
– You’ve chosen very interesting venues for the festival. What are the selection criteria for the participating photographers and the venues?
NY: Some of the venues approached us because they resonated with the plan. Sometimes we chose the artist for the location. Sometimes we chose the artist and then chose the location while thinking about the artist and how their art would fit the location.
LR: We also have a real connection with Kyoto. Interaction with the city is important. We really wanted to show off Kyoto as much as possible. We also have a program with students from Zokei (Kyoto University of Arts and Design) and Arles (Ecole Nationale Supérieure de la Photographie d’Arles), so every year we hope to show students from these universities. Ono Tadashi, who is currently teaching at Zokei and is a graduate of Arles, is implementing this plan for us. It will be like an exchange program.
RK: What about Christian Polak’s collection? Why did you include this collection?
LR: One of our contacts offered us this exhibition. He is based in Japan, so it made it easy to organize in a short time. Otherwise it would take two years working with institutions. It is a beautiful collection. He has some very unique motifs and interesting pieces. He recently acquired a late-Edo/early-Meiji-period album collected by a French traveler.
NY: We asked Benrido to copy and reprint the original photographs, so again it is one more collaboration with Kyoto.
RK: Benrido is a local printing company whocarries on a very special technique known as the collotype.
NY: It’s a 150-year-old technique that was developed in France, and they’ve used that very technique to make these prints.
LR: Kyoto is probably one of the last places in the world to do this. We wanted to collaborate with them.

The future of Kyoto and Japan
– Did you have any difficulties in this conservative city?
NY: Yes, in that respect I think it is one of the most difficult cities we could have chosen for our festival. Kyotoites don’t show their emotions, so it takes a long time to negotiate. Only little by little and very cautiously do they open. It takes a long time and a lot of patience and energy, but when we finally connect it’s strong.
Kyoto is a city where people are conscientious of history, beauty, culture – it’s part of the daily life here. So maybe they want tthe challenge of something new, they are just hesitant to take the risk. Luckily there were a few people who really believed in this project from the beginning and helped us. They gave us the confidence to continue. And step-by-step the doors finally started to open.
– On some level, Kyoto people are deeply curious about anything new.
LR and NY: Yeah! Yes! Actually, yes!

NY: They want to change, but not in a strange way. Which is why I suspect there’s a part of them that wants something to change in their every day surroundings. And we were newcomers in Kyoto…
LR: I think that’s our role – to bring some good ideas…
– … as a catalyst.
LR and NY: Yes.

LR: We have started to receive good coverage of this event overseas in the international press. It’s been very well received. Kyoto has such an aura with international people. People still feel attracted to Japan. Although that was a bit destabilized after Fukushima. This project is something positive.
This is maybe an aside, but people really tried to help us a lot. Especially in terms of venues. A lot of people offered their spaces. And we did a kind of co-production: they gave us the space – we gave them the exhibition. I think we were very, very lucky.
NY: And Kyoto people know high quality. If there is quality they….
LR: … give you their approval.
It’s a great experience to work with Kyoto artisans because you can make something unique. It can be like collaborating with artists.
– Besides the project with Benrido, are you looking to activate local craftsmen?
NY: Yeah, we want to collaborate with high technology companies, traditional artisans, Kyoto artisans. We want to show a new side of Japan. We want to show Kyoto – not only the historical city; we want to show the future of Kyoto, the future of Japan.

Lucille REYBOZ is a photographer born in Lyon, France and moved to Bamako, Mali when she was young. She first came to Japan in 1999 to work on Life Project with SAKAMOTO Ryuchi. For many years she divided her time between Africa and Japan. In 2007 she decided to settle in Tokyo and then in 2011 moved to Kyoto after the Great East Japan earthquake.
Yusuke NAKANISHI is a lighting artist born in Fukuoka, Kyushu. He lived in Tokyo for more than 20 years, writing and directing photography, stage lighting, performances and events. So far he has traveled in more than 30 countries. He has recently started a lighting installation series using natural materials, such as dried food and neon gas. Currently living in Kyoto.