the post-COVID-19 World:
For the great epoché
Explaining the “systemic crisis” to our children
Hidetaka Ishida

COVID-19, an infectious disease caused by the new coronavirus, is posing a major crisis to the world. The current crisis may one day disappear and our lives may be restored. But is it all right to return to our old ways? Philosopher/media studies theorist Hidetaka Ishida delves into this issue. 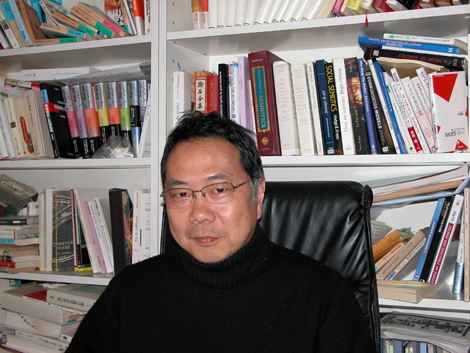 Verily, a great folly dwelleth in our Will; and it became a curse unto all humanity, that this folly acquired spirit!  (Friedrich Nietzsche, Thus Spoke Zarathustra)

According to Foucault, the “history of reason” among modern men and women began with the “great confinement” of the insane, beggars, vagabonds and criminals in “general hospitals” (Michel Foucault, History of Madness). After circling the globe for as many as four centuries, this history of reason has now placed people in countries around the world, albeit temporarily, in a state of “great confinement.”

That the majority of the world’s population would be having this experience at the same time is something no one would have imagined a year ago. The word “pandemic” derives from the Greek pandemos (from pan “all” + demos “people”), and when you think that indeed all people are currently experiencing this confinement simultaneously around the world, don’t you feel kind of happy (you don’t, I’m sure)?

Much more so than the Tokyo Olympics, which will likely never be held, this shared experience should become an excellent learning experience for the purposes of understanding the world to come (unless humans are fools, that is).

When people become seriously ill, they lie in their hospital wards and look back and reflect on their lives to date. At this time they understand various things. In the same way, this current experience is a good opportunity to reflect on the nature of human civilization and why things turned out the way they did. There ought to be some cognitive gains (intellectual benefits) in the form of insights provided by the state of emergency in life that is illness. Unless this is so, humans will not grow wiser.

For someone to become infected with a coronavirus, forests had to be destroyed and humans had to encroach on the animal kingdom so that domesticated animals could carry the virus (as for COVID-19, the details are not yet known). This was the theme of the animated movie Spirited Away. As a result of globalization, forests are being destroyed, energy resources are being used up, and the amount of CO2 in the atmosphere is increasing, causing global warming. In various places including North and South America and Australia, large-scale forest fires, massive typhoons and hurricanes and catastrophic floods are now occurring regularly (as predicted by Greta Thunberg).

The reason an unknown virus was able to spread so rapidly is because the speed and volume of the movement of people has increased dramatically, and the reason the movement of people and things has accelerated is because the world has become computerized, meaning that all points are connected via information networks. In this way, all out problems are now interrelated and the earth is being visited by systemic crises more and more frequently. People call this an “Anthropocene” problem, but it is logic that even an elementary schoolchild would easily understand if it was explained to them.

So, why cannot adults solve a problem that even children understand? The only possible explanation is that adults are stupid, but there is a reason for this (as Gottfried Leibniz said, “There is nothing without a reason.”). We live in an age in which it is inevitable from the perspective of world history that the most foolish among foolish adults become the world’s political leaders. It is accepted that they can appease people forsaken by the movement of capitalism, who are incapable of understanding the current world system and have been left behind by globalization, by providing them with a fake sketch map. In doing so, they are contributing to the failure to regulate global capitalism. In this sense, the folly pervading the world is part of the systemic crisis. This is the significance of Trump and Abe in world historical terms. Even now a Hegelian “cunning of reason” is in effect within world history (however invisible the “reason” and “cunning” may be).

In your room in your own house that has become a virtual hospital ward, all you can do is confront your computer. The thing you are now realizing once again is the value of the “real world,” and the meaning of “real contact” and “sharing space” with other people. Until now, the real world has been regarded as an “economic externality” that can be utilized for free. However, things will be different from now. You can now confront anew such ontological questions as What is telepresence? and What is reality? You have at last arrived at the moment of the great epoché (the suspension of judgment in preparation for categorical intuition).

Now, due to the “great confinement” online, you have been placed in a situation like that of a chamber in a general hospital at the dawn of modern reason. And you have just run through a rought outline of the systemic crisis facing this world we live in. This room you are confined to is full of stress and may lead you to be driven by impulses to commit domestic violence against your partner or family. But I want you to desist. Also, remember that the very production of such madness was the meaning of the confinement at the beginning of modernity. Confinement creates madness that enables observations that contribute to the creation of reason. As long as you remember this, then perhaps your foolish, dark impulses may also be capable of changing into the clarity required to see the essence of the history of the world that is now in the process of turning. “Men are so necessarily mad, that not to be mad would amount to another form of madness.” (Blaise Pascal, Discourse on the Passion of Love).

Hidetaka Ishida is Professor Emeritus at the University of Tokyo; philosopher, semiotician and theorist of media studies. He served as Dean of the Graduate School of Interdisciplinary Information Studies at the University of Tokyo. He edited the Japanese translation of Dits et Ecrits by Michel Foucault and La Technique et le Temps by Bernard Stiegler. His works in Japanese include, The Knowledge of Sign / The Knowledge of Media, Contemporary Philosophy, Media Theory for Adults, and The New Semiotics (with Hiroki Azuma).