Four artists from Her Name is Abstra

Every one of the twelve artists featured in Abstra would be capable of staging a show individually in this cavernous space.
This is a group show, composed of works that each has brought to a warehouse – not the conventional setting for displaying art. I’ve no idea how much discussion and coordination took place ahead of the exhibition, but the powerful phrasing of the statement suggests a show assembled with considerable attention to detail.
The flyer, large-format but convenient to carry, includes a large, detailed map giving directions to the venue – most helpful. More noteworthy however is the statement printed on the flyer, ensuring that not only do we have a map to guide us, we also have the dozen artists setting out in specific terms the path they should take, and endeavoring to inform us about it (“…if the American abstract expressionism that created a peak in art history thanks to an overwhelming allure inevitable for its time is viewed as abstract of a masculine, macho sort, the abstract art of our time must be of a different nature. Would it be correct to call it a feminine, as opposed to a masculine, abstract? This is one of our questions. Taking this question, and both using as our starting point, and reflecting upon, American abstract expressionism, we shall set our sights on the road ahead, and embark on a quest for that as yet elusive female, ‘Abstra'”…).
Of course, upon actually visiting the show, one realizes that this is not some simple path to a destination reached naturally by proceeding in accordance with these words. That is, one could probably go so far as to say that this exhibition was in fact designed to make us actively lose our way by reading the statement. This exhibition in its totality may be endeavoring to tell us that words are words, displays of stuff are displays, and not to confuse the two. Perhaps the intention is also to punish us for a tendency to rely unthinkingly on words, so to speak, or to find it reassuring to assign them superior status. Because what we perceive at this show is not so much a “feminine abstract” as something more utilitarian, a mysterious connection between “warehouse and me.”
At Her Name is Abstra (November 11 – December 16, 2012 / Daido Soko Warehouse) the artists having most fun contemplating “warehouse and me” are Kaneuji Teppei and Minamikawa Shimon.
Kaneuji Teppei presents here Model of Something #4, which diffuses the viewer’s line of sight with colorful rectalinear and diagonal lines on the surfaces of transparent nesting boxes. The work is displayed in a comparatively compact room, and the overall effect understated in the extreme. That is to say, lightweight and underwhelming. But in fact, this opinion of the piece is modified as one looks at other works in the large space next door. Then, Model of Something #4 starts to make a strikingly different impression. Two to three years ago when this series was unveiled at Shugoarts in Tokyo, despite its emptiness (that is, being mainly just boxes and lines) it already offered a kind of confusion for the eye that was at once like a hell one is doomed to gaze into forever, and at the same time pleasurable, but it strikes me that then, the work resembled little more than an unreal sort of card game. 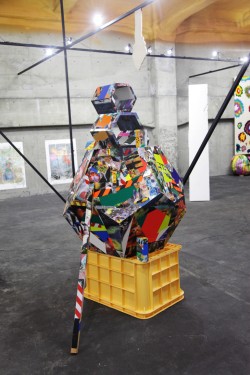 This time, walking around a real warehouse space, going round and round the works of other artists in rooms of various sizes, and another work of Kaneuji Teppei’s, Ghost in the Liquid Room (lenticular) #3, an object with 3D stickers stuck all over it, we may feel slightly dizzy (and not just because of the 3D stickers), but because the warehouse which ought to be the background – its walls, its floors – turn into a diagram, one could say, as if it had been plucked for the starring role, leaving us clueless as whether we are right now looking at a warehouse, or a work of art. And the process leading to this dizzy discombobulation was shown by the understated, subdued Model of Something #4 just seen in the small room next door. Or rather, one felt “dizzy” in the large warehouse space next door precisely because one had seen this work first. It was a work that though diminutive, retroactively acquired a powerful presence, much like the relatively diminutive sumo wrestler Mainoumi using technique to defeat gigantic opponents.
Turning to Minamikawa Shimon, we find his contribution of colorful, pop art-style paintings to this summer’s REAL JAPANESQUE: The Unique World of Japanese Contemporary Art at the National Museum of Art, Osaka still fresh in the mind. I suspect many thought his offerings there pretty good, but if hoping for a continuation here, may feel slightly let down. Not again? Yes, I’m afraid so. But in fact, as with the above piece by Kaneuji Teppei, faced with a blank work titled Four Paintings we notice ourselves gradually forming a close connection to the warehouse.
Strictly speaking, it is not really blank, because on close inspection the silver base has a contrasting dark and light pattern so faint as to be barely identifiable. It resembles the shadow of something, and thus brings to mind a certain famous figure in Japanese contemporary art history, but one soon realizes it is not him, because this is not something’s shadow. Or rather, not actually even a shadow. The sight of a row of panels on an angle, freestanding on feet like a slash across the warehouse, could almost pass as an original fixture of the warehouse. But does it blend in completely? No, there is also a sense of it subtly standing out from the “warehouse fixtures.” Which is what makes it interesting. It is indeed “four paintings.” And also like a mirror in which people are never reflected no matter how long they gaze in, only the warehouse. 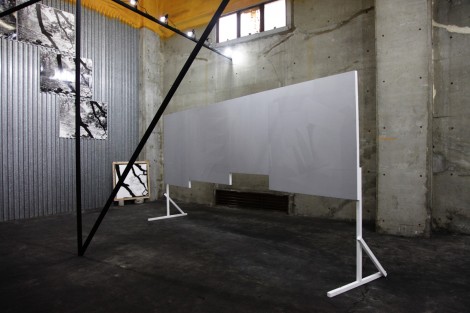 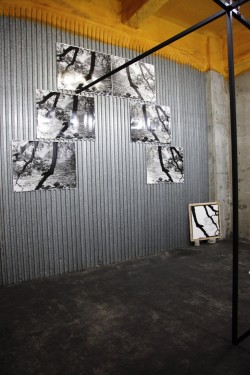 Miyake Saori, Something Hidden in A

Incidentally the subject of the statement was bokutachi, ie, the male form of we. No doubt this was a deliberate choice, as the exhibition also includes women, but these women seem to be taking the approach of “warehouse and this group show itself and me” rather than openly considering the likes of “warehouse and me.” Take Miyake Saori, who sticks repeating tree branch and water scenes on the wall as if trying to make them reach the ceiling. From this, looking upward we imagine an entire large and invisible tree, but in fact no tree or anything like it is depicted. Unable to stop seeing it, thinking it looks like that anyway, it is fair to say at this moment one is exactly that reader reading the statement. Assuming something important, necessary for viewing is written there, we the naïve readers read it in, and Miyake admonishes us for it. Admonish might be an odd way to describe it, but one can hear the work saying, if you have the time to look at something that isn’t there, feel the size of this place, of the warehouse here. In short, scenes of tree branches and water were stuck from floor to ceiling not so that we can gaze up at some tall fantastical tree, but as a ruler to measure the height of the warehouse.
Most of the works are affixed to the walls of the warehouse, compelling us also to spend most of our time looking at the walls. One exception is a work by Kan Kaoru, which in a spacious room is deliberately small and unobtrusively affixed to a column (in the small room next door, conversely she shows a large work). There it sits, like a bagmoth larva’s dream. At reception visitors are given a diagram of the exhibition layout showing the positioning of all works by the twelve artists, but it is this little touch by Kan Kaoru that permits works not listed to quietly infiltrate by stealth. Such small surprises that elude the floor plan will, for that very reason, be forever remembered. 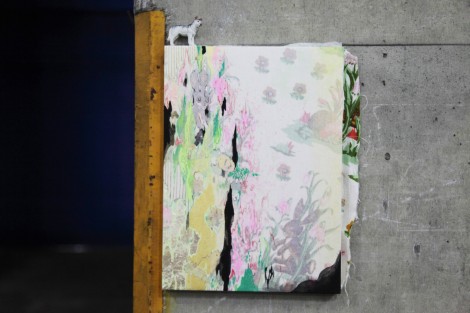 In any case, if when viewing this exhibition one focuses on these four artists, without being sidetracked by the statement on the flyer (although obviously, the text on the flyer is important and moving in its own way), one can sense that the statement is never more than words and bears no relation to the ideas behind the works. The best part of a group show by twelve artists with totally divergent, diverse talents, by no means walking the same path, can be found now, until December 16, in the Daido Soko Warehouse at Shichihonmatsu-dori in Saiin.