From 2001 to 2010 I was the director of a film festival, and so I visited Kyoto every year at around the time of the Aoi Festival. We screened films from morning till night at the Goethe-Institut. I got to meet various artists with connections to Kyoto, including a young Miyanaga Akira, Mizuno Katsunori, Hayashi Yuki, Ito Nobuaki and Yamamoto Makiko.
One artist who contributed films and other artworks almost every year to this film festival (the Image Forum Festival, which tours five cities annually) was Ito Ryusuke, whose non-filmic artworks in particular were terrifying in that after their installation in Tokyo they would be dismantled and packed up and shipped using a normal parcel delivery service before being reassembled the day prior to the opening in Kyoto by me and a group of art school students (!), so that every year I would have to go to the Keiyo D2 just north of the Goethe-Institut to buy parts to repair them… That these artworks are coming together at the Kodama Gallery fills me with deep emotion and brings home to me just how audacious my actions were in those days.
Broadly speaking there are two focuses to Ito’s artwork, represented by the “Plate” series, in which existing film is physically, sculpturally collaged and displayed, and direct contact 16mm prints made from these collages are also screened, and the “Realistic Virtuality” series, in which CCD cameras are embedded in elaborate miniature sets and the sets and live images captured by the cameras displayed alongside each other. The works included in this latest exhibition belong to the latter category. The title was coined by Ito by reversing the order of the words “virtual reality,” and refers to what Ito describes on his website as “expressing in an interesting manner the ‘gap’ between ‘reality’ and ‘the reality conveyed by the media (mass media).'” The works explore in a charming fashion the “reality gap” in the images we enjoy everyday, by laying bare, in a way, the function and structure of video (broadcasts). This is achieved by juxtaposing the images imprinted on our memory and the miniature sets from which they are sourced. The miniature sets retain in rough form parts that are elaborately created and parts that do not appear in the video, producing a sense of being on a movie set, or a sense of “set-building” (the installation of sets in film studios, etc.).
The appeal of set-building is something special. The Thomas Demand exhibition (2012) at the Museum of Contemporary Art Tokyo also featured some wonderful (photographs of) elaborate models, but all my interest was focused on the installation of the special effects set for A Giant Warrior Descends on Tokyo, the centerpiece of the following Anno Hideaki exhibition, which was going on before my very eyes. The gap between what lay within and outside the field of view of the cameras was something I could have looked at all day long without tiring. The manner in which the gap widened as the set became more elaborate was particularly pleasing.

Editor Ozaki Tetsuya pointed out a resemblance to the work of Zin Kijong, and I would have to agree. They are definitely similar. Though perhaps there is a slight difference between Zin’s charming sense of cheapness and Ito’s set-building effect (the intentional coexistence of elaborateness and roughness). If I were to suggest one more difference, it would probably be the “Murasame Kenji” element. This is the pen name Ito Ryusuke uses when he works as a subculture commentator, editor or media critic. Some readers may recognize him from this pen name. As a handy reference for those who don’t, the articles he writes for the Hokkaido Shimbun are posted on Ito’s blog, while his Model Graphix articles are reproduced in the exhibition catalog published by the Miyanomori International Museum of Art, Sapporo (Kudo Takeshi, who espouses his own theory of Ito Ryusuke based on these works of criticism, is both a sympathetic supporter and abettor of Ito’s artwork).
At home in multiple genres, Murasame Kenji not only comments on particular manga and anime, but also uses these manga and anime as starting points to collage a variety of topics, including contemporary art, film history and science fiction. Murasame Kenji’s articles and Ito Ryusuke’s installations use different materials, but they have the same effect. In Chicago he studied under Sharon Cousin and was in the same class as Apichatpong Weerasethakul, and having bitter memories of the rupture between art and film that occurred in Japan just as it did in the U.S., Ito produces an intellectual panic with an all-star cast, even extending to subculture, to rival that of The Towering Inferno.

In addition, the works assembled for this exhibition are heavy. Aren’t they all the kind of thing that would more or less kill you if you got too close? Drones, black holes, massive earthquakes and hell, Little Boy, and Fukushima Daichi…
It Never Existed and That Never Existed (both 2012), both of which deal with the interior of the Fukushima Daichi Nuclear Power Plant and are likely to become the centerpieces of the exhibition, are eerie works that reaffirm the bitter memories we’ve been unable to shake off to this day. Here we have the “inside” of “that,” which, in the wake of March 11, everyone living in Japan would like to see, the “thing” that, despite being referred to repeatedly in numerous CG recreations, outlook charts, government opinions, overseas media exposés, speculations and rumors, no one has actually seen. It’s also something we’re frustrated by and utterly sick of and would like to believe never existed. Over this, Ito superimposes the theme of “malevolent deities,” a film history cliché. This represents not only the shock of disaster movies (“that day”), but also the anxiety and fear (from “that day,” when the future was unclear, when the damage was unclear, and when the responsibility was unclear, to this day) associated with things beyond human knowledge. As the camera pierces and melts through the Bisco box propped up on an ordinary table the likes of which can be seen anywhere in Japan, the exposed reactor container no one has been able to reach comes into view. It is a sickening icon from which countless torn off pipes (ah, they’re leaking) and exposed concrete reinforcing rods protrude like needles. The camera dollies back silently without anything happening and returns to the world of Bisco. Thoughtfully, two works featuring the same building are presented, providing two screens worth of the nightmare-like to-and-fro motion. As if to prevent us saying this kind of thing or that kind of thing didn’t happen! 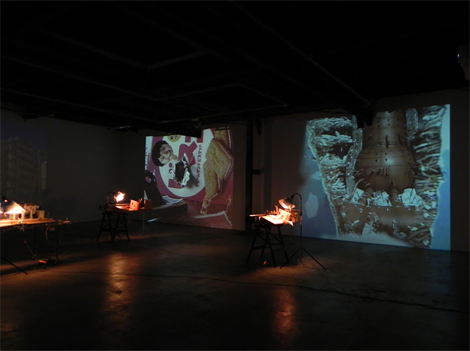 The venue, the Kodama Gallery, is beside the Kamo-gawa River, within walking distance, if you don’t mind a bit of a hike, of the good old Goethe-Institut. The willows will no doubt look splendid in the spring weather. Just before the Goethe-Institut is Kojin (“malevolent deity”) Bridge, which is apparently named after Kiyoshikojin temple, dedicated to Japan’s oldest malevolent deity. Perhaps it would be a good idea to organize a malevolent deity tour. Then again, realistic virtuality that is neither reality nor virtual reality is no doubt difficult to pacify.