Stéphane MALLARMÉ’s Igitur was recently performed  as part of Mallarmé Project III (at Kyoto Art Theater, Shunjuza, July 22nd, 2012). What does that mean? For those who know a bit about Mallarmé, it is quite thrilling — no, something that makes you think of recklessness.
That is not the case, one of the organizers, WATANABE Moriaki would retort. According to him, as seen in Offices (from Divagations), Mallarmé had a vision of futuristic festive ensemble play like Catholic liturgies or music dramas and one can read the potential of his dramaticism in his seemingly impenetrable poems.
In other words, Igitur is a theatrical “play” which implies existence of Hamlet at its back, or, put differently, something like Japanese Noh theater. 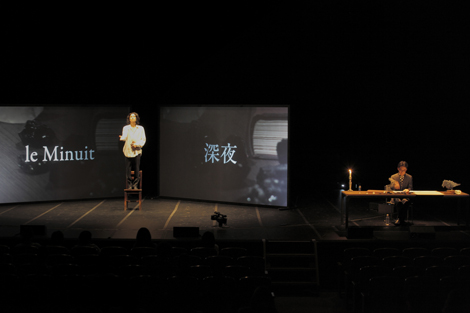 However, even if I hear such a thing, my doubt that Igitur could be performed did not disappear. Among Mallarmé’s works, could this piece, one of the most abstract and esoteric, be actually performed? For example, even the characters who say the lines are not clear in Igitur. Igitur (a Latin adverb meaning “thus”, “consequently” or “therefore”) first seems to be the speaker of the monologue but then drinks poison to commit suicide. So, in terms of the structure of the narrative, Igitur cannot be the speaker. Instead, capitalized and abstract common nouns such as “Night (Nuit)“, “Midnight (Minuit)” and “Shadow (Ombre)” can qualify the characters who speak the lines. In this way, episodes (contes) told by these “speakers” who are hard to imagine are written in a grammatical voice for the stage but in fact will be filled with images which are hard to imagine and unsuitable for a performance. So if a reader of Igitur finds a word like “panel”, he’ll be baffled in the following manner – panel? “You become an axis and spin endlessly while dazzled in your immobility” is the illusion that the panel of the night ébénéenne projects. (translation by Realkyoto) What on earth is that? 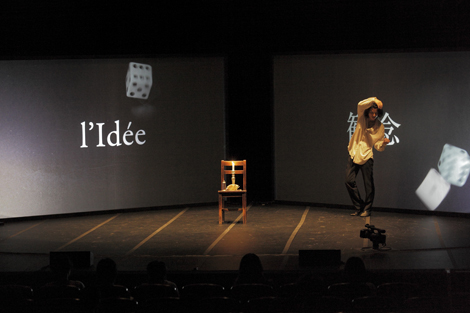 What on earth is that? The question reverberates. And while this may endlessly baffle argumentative readers, at Mallarmé Project, “panels” will appear in an almost disappointingly easy fashion. At Kyoto Art Theater (Shunju-za), built specifically for Kabuki theater, there is a round stage (a revolving disk-shaped stage help to change scenes easily in Kabuki plays), and two panels (where half-transparent screens are put on) will literally “forever continue to revolve” with projected images.
A few spectators who felt they were taken by and sat frustrated watching the play immersed in the dark, might take thought for comments which will be addressed to friends after the performance in the theater foyer in the following way. “I get it — Mallarmé’s panels were metaphorically represented by the round stage.” “Or was it an interpretation or.. ” “The heartbeat and candles are quoted from Igitur. That is easy to understand.” “I guess it means interpretation is everywhere if you look closely.” “The algorithmically controlled millions of stardust, familiar to the audience, projected on the screen by TAKATANI Shiro may be considered as a hypermedia-aided interpretation of Mallarmé’s cosmic vision, for example, “ecumes originelles“ in “Un coup de dés jamais n’abolira le hasard.” “We can say SAKAMOTO Ryuichi’s Debussy-like repetitive melody is a further theatrical interpretation, since Debussy interpreted the music for Mallarmé.” “When reading Hérodiade, the scene projected on the panels was a scene from the Mediterranean coast. Maybe it was Sicilly. However, the scene and the nude dancers overlapped in a complex way might be an interpretation of  “L’après-midi d’un faune.” “In that way, it was really Debussy-like.” “Although the performance is titled Igitur, Hérodiade and L’après-midi d’un faune, as well as the pre-recorded commentary by Sir Watanabe Moriaki were also inserted. It was like Chikuma Shobo’s “Complete Works of Mallarmé” was interpreted on stage.” “Looking at TERADA Misako and SHIRAI Tsuyoshi’s Noh and Kyogen-like movements, I was reminded of Sir Watanabe’s Noh performance of Racine.”….
In this way, there were a lot of “interpretations” on the stage which would fire up the post-performance discussion in the foyer. That was probably because of the coordination of ASADA Akira, who was the originator of the Mallarmé Project and who also recited on stage with Watanabe Moriaki. From a twisted point of view, one could think that a bunch of semi-snobs on the surface were having banal talk at a place full of various potential created by the brilliant conspirator ASADA Akira. 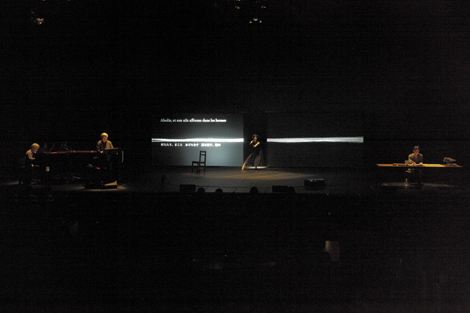 Nonetheless, Mallarmé Project isn’t just a service to idle chatter. And more than anything, Mallarmé Project III, or the intensity  of Mallarmé, should consist in the cosmic madness, which is far beyond the snobbish chatter. It would be seriously unfair just guessing the source of interpretations shown on stage. Above all, the adaptation of “panels” contains the essential range which resonates with Mallarmé’s madness. To get into the core of that, let’s go forth in a somewhat reckless manner. 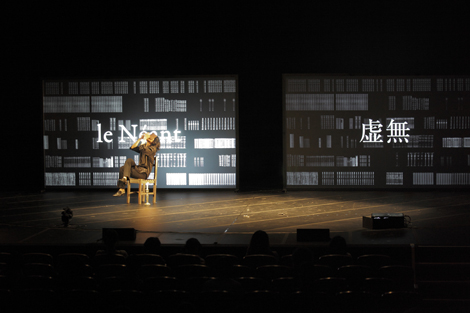 While video was projected on their surfaces, the two panels were automatically repeating rotations on the stage from the front to the back, and back to front. Since the panels were in continual motion, the angle of the audience’s vision was always changing. The video on the panels almost disappeared from sight, then after a brief period, another video was shown and came back. Of course, the video itself changed moment by moment, and there were deviations of images on various layers. Through those deviations, an impression of distortion in mechanical repetition was conveyed.
While the rotating screens on the stage were somewhat a physical obstacle (that sense of intimidation is a bit like when you pass through a large revolving door), it was no doubt spectacular to see Shirai and Terada dancing simultaneously with the video while dodging the panels. However, the distorting movement, peculiar to the rotation of the panels, created a thrilling impression, and it even gives you the feeling that the dancers’ bodies are being rolled up in a extremely slow turning screw or something. The audience felt themselves as if they were a spectator of a horror movie who had to draw back like the actor to protect their bodies from something pressing. The theater’s darkness pervaded around you started to have a peculiar material feeling and the sound of the beat that was heard at times was like the heartbeat of the darkness…
The repetitions bearing deviation approaching to you with a material like existence –when you try to summarize the sensation brought by the panels like this, it is at the same time the most accurate description of the quintessence of the text Igitur. What does this mean? 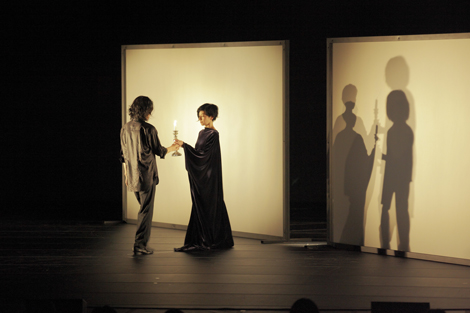 Igitur is conceptual and at the same time a very stereotypical and experiential text. Words such as “Infinite (Infini)”, “Idea (Idee)”, “panels (panneaux)”,”fricative (frôlement)”,”beat (battement)”, as well as the “speaker” words such as  “Night (Nuit)”, “Midnight (Minuit)” and “Shadow (Ombre)” which are also “characters”, are relentlessly repeated. This obsessive repetition begins to deviate, stressed by the distorting pressure of the thoughts disproportionately spinning round and round between two extremes of “Absolute (Absolu)” and “Nothingness (Rien)”. Like in the last line of Igitur (Edmond Bonniot version), a rotation baring deviation like an “oscillating circle” which never reaches the “centric tranquility” appears here. The rotation continues with force entangling words, ideas, readers, and even the whole universe.
Then, the book, with the same sensation as what the “panel rotations” are comprised of, will bring you, the same experience as what the darkness of the theater which holds beat brings about. To paraphrase using the repeating words in Igitur, characters similar to “Idea (Idee)” itself, such as “Night (Nuit)”, “Midnight (Minuit)” “Shadow (Ombre)”, whose outlines are likely to “vanish like the mist” towards the “Infinite (Infini)” begin to hold “beat”, and appear as “Him” or “Her” who even makes slightly erotic ”fricative (frôlement)”, (frôlement also suggests a ruffling of clothes) and approach the readers with the presence of a stage actor.
A book like a theater? That’s completely right. But something that we need to add hastily is that it might be possible to call back the beat that Mallarmé brings about, not only for a book and theater but also for everything such as music (the rhythm bearing deviation of  Boulez and Debussy!) and an installation. Or if we quote Derrida commenting on translations of Mallarmé “Poe’s rhymes are not preserved, of course, but on all levels, as many as possible, the beats of a rhythm, whatever their support or material surface.” (Derrida, Glas, p.154) )
At any rate, we can say that Mallarmé Project III, a stage production adapted from a book, displayed various potentials through that adaptation. If we roughly summarize one of them, it would look like the following: reading Mallarmé, is to dance with Mallarmé to his sensual repetition baring deviation, at times dodging and at times synchronizing (like Terada Misako, Shirai Tsuyoshi), rather than to decipher the codes (recently, Quentin Meillassoux has read Mallarmé’s numbers as a code). Even if that were a book or a stage or anywhere. 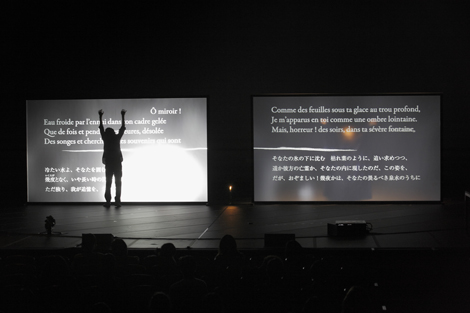 This year is the third showing of the Mallarmé Project. How will it develop in the future?  Personally I’d like to experience it in 360 degree surround sound like Boulez’s Repons (1981-84). Whatever the case, the Mallarmé Project is itself a repetition bearing deviation, and it is hoped it can continue to give forth a new sense of bodily sensation. 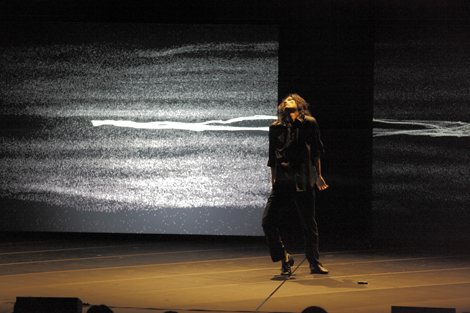 
SATO Yuichi
A poet born in 1983, he received the Gendaishi techo Award for contemporary poetry in 2007. He is currently the president of the SNS poetry site Shiika and of Koe Cypher.