Trisha Brown Dance Company review The power of a smile 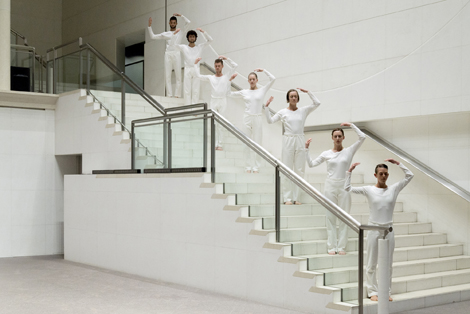 No matter how white and neutral it may look, these days no one believes the art museum to be a neutral space. That it appears so is no more than a design feature, an effect, merely a reflection of the tastes of a specific era (to wit, ours). Presenting it nevertheless as neutral is merely an act of sorts, perpetrated by a particular political standpoint endeavoring to flaunt its “public” credentials. It is, in other words, deceitful.
Moreover for the purpose of maintaining this ostensibly public quality, or neutrality, a kind of logic is assembled that has the potential to destroy this “neutrality,” in which different sorts of expression can be excluded in advance. And in fact, such exclusion does occur. This is the state of culture today, plain for anyone to see.
The architecture of the National Museum of Modern Art, Kyoto, designed in 1986 by Maki Fumihiko, ranks as an example of so-called post-modernism, yet it is widely recognized that post-modern ideas, which aimed to embrace plurality, ultimately became linked with free-market ideology, which carelessly permits and propagates disparity. In the market, disparity is converted into the amount of anonymous consumption (popularity), eventually converging into a neutral fixed form devoid of symbols (unbranded). Post-modernism, with its link to the market-oriented economy, removed the pain/poison from the pain that inherently pervades the present, that is from the disparity that ought to have never been embraced in the place that is the present, and melded it into the monotonous backdrop of the market/stage, as the texture of some nostalgic memory.
It is worth noting that art museums dedicated to “nowness,” that is, contemporary art museums, first emerged in this post-modern era. In such places the present was historicized in advance, that is, stylized, or all kinds of history made available for consumption in synchronized fashion as a style.
By the 1970s, no one any longer believed in what for a time after World War II, had seemed to be a return to the linear march of history. The business of avant-garde art, which began to unfold in new ways from the 1960s, generally speaking progressed away from a questioning of culture collected in a single place or time, to concentrating on making holes in uniform times and places, and bringing in and propagating heterogeneous places.
Trisha Brown’s work was the same, because dance, no matter in what kind of setting it took place, was about establishing (in the order of an existing place) a different place and time solely through a series of bodily gestures.
Gestures that unfold in an accumulation of simple movements can arise in any location (whether or not there is an audience). In other words, as movements equipped with inherent tasks and parameters, they are able to be autonomous, not bound by location. The term site-specific is a misunderstood one. The critical thing is not to fall in line with the special nature of the place, but for deeds possessing autonomous rules to be interposed there regardless of the conditions and rules restricting the objects and behavior that exist in that place. The result is the emergence of collision and conflict between multiple sites with different rules, that is, laws, this very contrast highlighting the latent properties of the site. What emerges in such a setting could be described as the most primal of political conflict.
The Trisha Brown Dance Company performance staged in the lobby of the National Museum of Modern Art, Kyoto also appeared to be an aggregation of pieces from before the company’s main works moved to the proscenium stage in the 1980s. Although Trisha herself was unable to perform, it was a rare opportunity in Japan these days to witness such experimental work rich in possibilities (strictly speaking this includes pieces like Set and Reset, in which minimal elements of movement are selected from a work for the stage and reconfigured into an off-stage piece).
It made for a curious spectacle. Obviously, the audience had paid to watch, but what they were watching were dancers solemnly carrying out tasks assigned to them. The fastidiousness of the dancers, immersed in their tasks (coupled with the almost overly-fastidious whiteness of their garb) applied (as it was doubtless intended to) a tacit pressure and tension to the members of the audience (who having no tasks of their own to complete), just followed the dancers around, watching them. 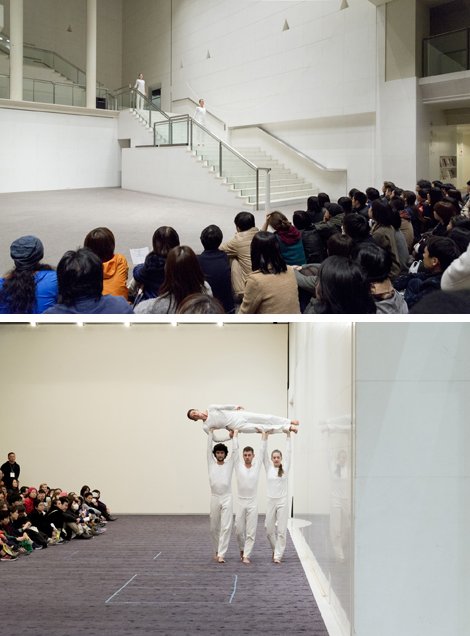 One could say that in reality, the audience were being forced to notice functional gestures virtually the same as acts of labor such as installing electrical cabling or folding laundry, but (despite) this being the case, unlike acts solely designed to show to an audience, these gestures possess a strength, a dignified sort of beauty, because while the acts can be performed even without an audience, the audience looking on is made aware of the fact that they are looking on of their own volition. This asymmetry can even generate in the viewer a kind of unease, a sense of engaging in voyeurism.
It should be said though that this effect was not as great as when these same works were performed in the 1970s. Back then, carrying out particular acts in any location, with no regard for the audience, literally exposed asymmetric viewpoints; the different laws being followed by each; political settings. When a housekeeper cleans the floor while a family are eating, family and housekeeper take little notice of each other’s presence. But what is occurring here is that the family, which presumably instructed the housekeeper to do the job, are conversely shown that the act is equipped with an autonomy, that is, a self-contained strength, that their own loose (unregulated) behavior does not attain.
The resolute presentation of a conflicting law, that “my conduct strictly follows its own law” demonstrates the principle of how self-government and resistance are carried out.
Trisha Brown’s rare talent was to carry out this presenting, this resisting, with a graceful smile. For example, in Locus Quartet Variation, male dancers move female dancers who are repeating the same movements, each time placing the women’s bodies on the floor at unnatural angles. Yet no matter what poses the female dancers are forced into, they persist in repeating the same actions, in a work that clearly demonstrates the asymmetric nature of gender-compelled behavior. Or take the renowned Spanish Dance, a humorous work in which a succession of female dancers transmit movements via highly physical contact, to the strains of Bob Dylan, exhibiting autonomous motion reminiscent of caterpillars. Yet shown those women smiling as they give themselves up to the movements generated, it was the viewer who was excluded, left only to watch. To what degree, one wonders, were the audience able to be self-aware, in that old post-modern architectural space, of the discomfort they ought to have become productively conscious of? 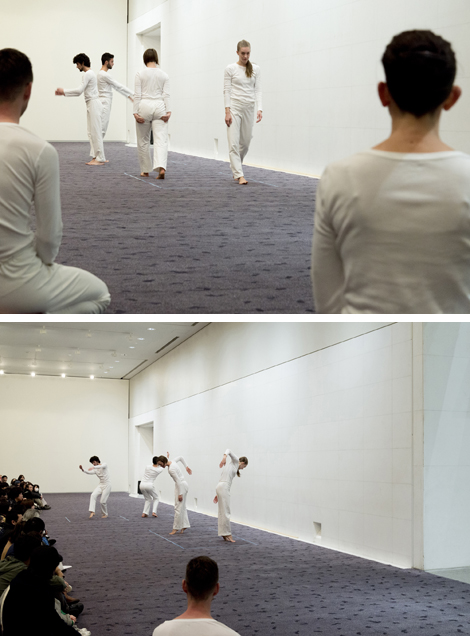 Once, when I had the opportunity to work with Trisha Brown (I love my robots. [2007]), at the talk following the premier, someone asked, “You people of the Judson Church school: your work used to have political implications: have you now lost that?”
Trisha replied with a smile, “When I’m dancing, I don’t think about anything.” But in contrast to that neat yet complete answer, yours truly blurted out, “In that robots are not seen as people, they are already the object of political discrimination. This kind of asymmetry of communication was the concept shared with Trisha in this work.” I now regret making that comment. It detracts from Trisha’s charm. I came to realize that the confidence that sustains Trisha’s ability to smile serenely whatever the setting, was the very wellspring of political resistance.

Okazaki Kenjiro
Artist, critic. Born 1955 in Tokyo. Since 1982, when he was invited to show at the 1982 Biennale de Paris, he has participated in a long list of international exhibitions. He had a solo show at the Sezon Museum of Modern Art in 2002, the same year in which he served as director of the Japanese Pavilion for the 8th Venice Architecture Biennale. His ever-cutting-edge artistic practice includes collaborations with contemporary dancer Trisha Brown.

*“Trisha Brown: In Plain Site” was held at the National Museum of Modern Art, Kyoto from March 19 to 21, 2016 by invitation from the international performing arts festival Kyoto Experiment 2016.