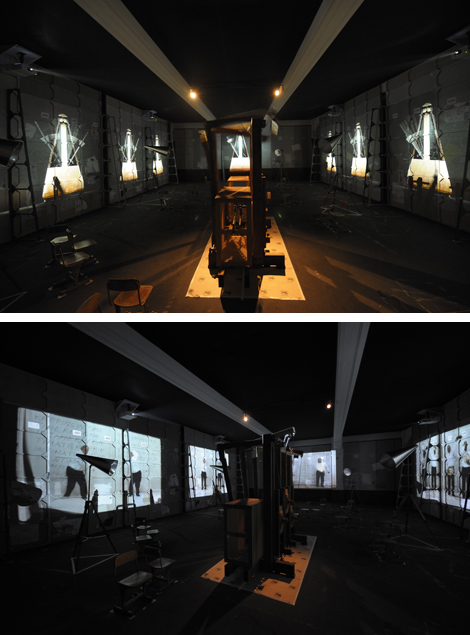 Whispers of the name William Kentridge have become increasingly audible in the contemporary art world over the last decade or so, and Kentridge’s status as a master in his field is now firmly established. Inheriting the mantle of artist-magicians like the draftsman Albrecht Durer (Melencolia), composer Mozart (The Magic Flute), and film director Georges Méliès (A Trip to the Moon), using animations created from hundreds of charcoal and pastel sketches Kentridge breathes life into the spirits of people consigned to obscurity, resurrecting in magical fashion the history of his native South Africa, a nation that dwells on the fringes of western culture. This installation at the former Rissei Elementary School presented as a prelude to Parasophia: Kyoto International Festival of Contemporary Culture, scheduled to begin in 2015, is titled Refusal of Time. Since its presentation at Documenta 13 in 2012, a total of six editions of Refusal have been produced, and the work is currently attracting audiences all over the world, at such places as the Metropolitan Museum of Art. While this large-scale installation indeed master-like in style does evoke a pang of nostalgia for Kentridge’s previous more playful efforts with their vestiges of DIY amateurishness, it could also be described as a concentration – espresso-like – of Kentridge’s ideas. Nor is the term espresso a mere metaphor here: Kentridge himself, in Journey to the Moon, his homage to Georges Méliès, presents his own image in the form of an espresso maker. Kentridge works his magic, and this coffee pot suddenly morphs into a rocket, its explosive power enticing us on a trip into space, setting our imaginations free to roam beyond a Milky Way of soaring comets and unfolding Big Bang. 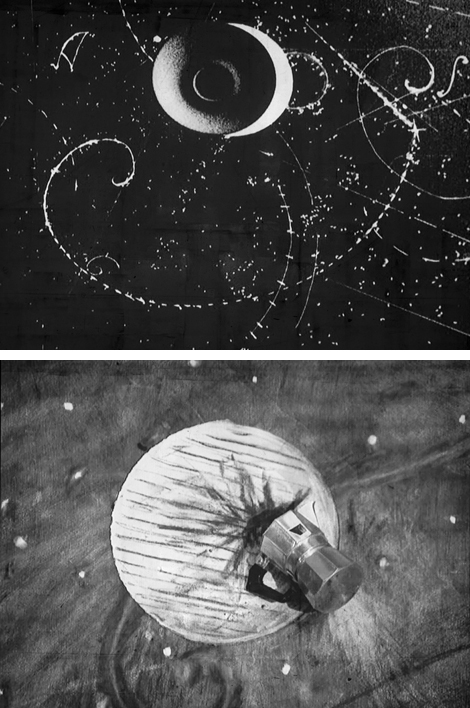 #2. Video stills, (Homage to Georges Méliès / As a rocket an espresso maker)
William Kentridge, Journey to the Moon, 2003

Refusal of Time is an attempt, with the assistance of science historian Peter Galison, to take scientific, historical and artistic approaches to investigate new concepts surrounding time that emerged a century ago. It was an era that nurtured imaginings of a four-dimensional world in which the dimension of time was added to solid space, eg the supersonic, the theory of relativity, internal duration. In the art world too, this period saw the birth of numerous forms of expression to rival the mechanical aesthetics of the industrial age, including Cubism, Futurism, Dada, and Russian Constructivism. Here, the tracks of invisible forces such as speed, magnetism, and electromagnetic waves were rendered visible in dynamic lines, the noise of the city was recorded, made into collage and rendered as music, readymade goods befitting the industrial age were displayed as sculpture, and cities were transformed into painted canvases amid carnival-like, revolutionary fervor. For Kentridge, the most important work of modern art is probably Alfred Jarry’s piece of absurdist theater, Ubu Roi , first performed in 1896. The figure of Ubu Roi (King Ubu), who despite usurping the throne throws himself into a life of dissipation, leading to exile, is overlaid with that of a megalomaniac Kentridge doppelganger who uses artistic means to recreate the world. Jarry embraced the notion of a “time machine” in which time as an event is constructed three-dimensionally in physical space. Film, the invention of which coincided with Jarry’s play, became a device for taking events from the past and releasing them to the future.
As well as the issues of scientific discovery and artistic imagination, Refusal of Time deals with issues peculiar to the modern historical time inseparable from these. First came railways and communication by Morse code, then in the twentieth century, progressive standardization of the everyday via electrification. The world’s geographical vastness is horizontally integrated by technology. Through this weft pass the vertical warp threads of world standard time. The megaphone performing NO + YES = NOISE is at once a loudspeaker issuing orders to people at a factory, and a telescope at the Greenwich Observatory surveying the celestial sphere. Mines extracting raw materials and factory assembly lines processing them were integrated via standard time – easing the way for a single global flow of traffic/distribution – and thermometers that took constantly fluctuating thermal energy and governed it flexibly to maintain fixed levels. Thus time and space came to be managed as things gazed upon according to a fixed rule of perspective, through a single giant telescope. The city of Johannesburg, which provides the setting for Kentridge’s art, may perch on the edge of the world, but it also serves as a geographical interchange for myriad conflicting forces. During the same period, ethnic cleansing in the form of pogroms began in eastern Europe, and Kentridge’s own lineage were among those forced to emigrate. Along with objects and information, the lives and deaths of people were incorporated seamlessly in a global production line. 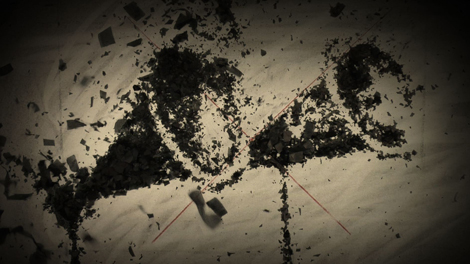 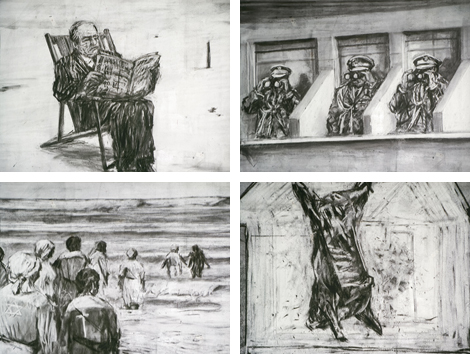 Kentridge’s way of resisting the cruel time management of the modern day, and indicting and attempting to compensate for multiple layers of history, is eminently lyrical. His method is to draw and erase individual sheets of black and white animation, over and over, and make the traces and noise of those erased lines appear out of the screen like afterimages, just in the way that waves crash and retreat on a beach, where the footprints of people and animals from over the sea sink and disappear (think of Tide Table, almost cruel in its sweetness). The mission of the artist to actualize the process of existing, through traces of handwork, becomes a means of reversing or resisting the extinguishing of life by time management. But when the flow of human hands or the beat of the pulse starts to fall behind the speed of machine-managed time, what do people have left? A swift solution would be to take those machines and use the very dynamite employed to extract their raw materials to blow them up. Refusal of Time features an episode involving the “propaganda by deed” plot to blow up Greenwich Observatory. However the destruction upon destruction, the tension of this conflict penetrates people’s very inner selves, sparking lover’s tiffs at home, and civil war, inviting demands for even more pervasive management, and an even more horrific world war. As a substitute, Kentridge offers a more artistic idea. Images of explosions are replaced with highly dreamlike images and given physical form in the body of dancer Dada Masilo as a serpentine dance with snaking fabric, while the pages of books scattered on the laboratory floor flutter into the air as if to reject, or refuse, time. 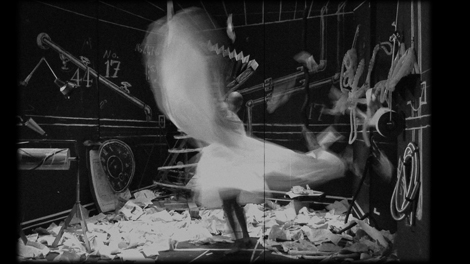 #5. Video still, (Dancer Dada Masilo and the pages of books)
William Kentridge, The Refusal of Time, 2012

Thus what Kentridge is at great pains to develop is a way to take wreckage scattered by destruction, turn back time and recast that wreckage as images that focus on the lives of people. How to identify the emergence of shapes in fragments scattered and lost through entropy, make them recoalesce and render them vibrantly alive? The time of disparate events must be reintegrated three-dimensionally in a body rendered spatial. The first thing to do to achieve this is to remake the remains of the blown-up machines into musical instruments, and dance and sing on the streets. The black box generating visual and aural imagery is no more than a means to nurture the imagination required to temporarily project the past onto the future. For it to become a time machine that incubates past and future life requires the addition of bellows to generate a current of air to adjust the temperature. The bellows, lungs of the machine, working away quietly at the core of the installation, may for us arouse the kind of unease associated with nuclear reactors, but depending on our vision, even as they fan the flames of war, they may laugh off that unease and inflate a balloon in the hope of peace. 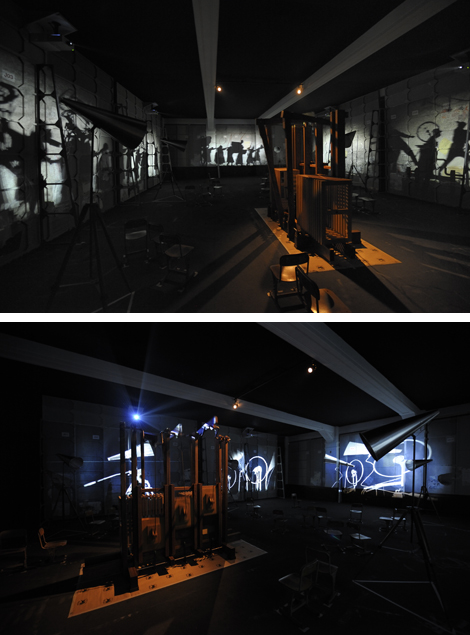