It has been half a year since the Ensemble Asia, Asian Sounds Research presentation meeting was held last December at Shikanjima Port, Osaka. 8 months after documentation footage of the research at Penang Island (Malaysia) was shown at this meeting, the first event of Asian Sounds Research was to finally take place, and was named OPEN GATE. As the subtitle ‘An ever-changing exhibition’ indicates, the participants would keep altering it during the exhibition period. According to the main idea of the show, the process of a certain ‘place’ being created through the artists and their work influencing each other and interacting with the space is what was to become the exhibition.
The project was named Sound Research from the start, and was organized by musicians with the aim of creating interactions between the origins and genres of artists and musicians from Asia and Japan through collaboration. In addition, while it uses the format of an exhibition, it differs from the static image of an exhibition by dynamically changing through time through the performers receiving mutual interventions from each other as in an improvised performance.
The overall image then, besides the making of a ‘place’ at the end, can only be talked about through observing the process that lead to this conclusion. This being the case, I headed to Penang to witness part of this process, while thinking about what the possibilities might be of this exhibition that serves as a catalyst through changes and interactions.

On June 4, despite the plane we planned to board at Narita being cancelled, I safely arrived at Penang with the two members of Tenniscoats. On the following day we headed to the venue. Hin Bus Depot Art Centre was a collaborator as well as the stage for this exhibition and, despite being in the World Heritage city of George Town, is located on the edge of an area lined with giant hotels and shopping centers. Originally a bus depot, the location was like a ‘garden’ that suddenly emerged in the middle of a city. When entering the facade at the front there is a kind of lobby room that may have been a waiting room, and has now become an exhibition space. There is a stylish café that has been renovated on the opposite side that sandwiches the entrance. Passing through the facade, there is a lawn that seems set apart from the hustle and bustle of the city, as well as a quiet outdoor space where walls from an abandoned building remain. It is a space where time seems to move differently, flowing gently. Inside there is a large space that seems like a warehouse or a stage that only has a roof, where various events are held. For these three weeks this location will serve as a place for each participant to come and go through their ‘open gate’.

At the venue, the participants are already getting prepared. Annabelle Ng has a power drill in her hand as she silently makes the supports to hang drawings from. Tadashi Yonago is putting together household items, scrap material, lights and batteries to make kinetic objects through bricolage. Yonago is also making something that looks like a stove outside. It is already moving, but how it will be when completed is unknown. It is an ‘ever-changing’ exhibition after all, so the completion of a work is only ever relevant to each particular point in time. It is not as if a so-called resolution was the aim.
Yoshihito Mizuuchi is using scrap material to build what looks like a tall seesaw in the abandoned interior building. Buckets have been attached on both sides, so that water can accumulate. It is apparently a mechanism that moves via rainfall. It is built rather roughly but, while also considering the appearance of them as they are being made, the sight of four or five of them lined up somehow blend with the surrounding. Beside them, a form of pool has been made with waterproof sheets and there are many expanded black plastic bags scattered inside. It seems that rainwater is meant to gather here as well.
Hoo Fan Chon is constructing a mobile stall pulled by a bicycle, where he has lined up a variety of goods to sell. In the stall that is not overly big, he has arranged sweets, instant noodles, tobacco, drinks, films on Blu-ray discs and comics drawn by the artist that have been arranged neatly yet tightly packed together. Eeyan, an artist as well as being the curator of Hin Bus Depot, checks the overall progress of the production while managing the budget and procuring meals. Everyone continues their work quietly in preparation for the opening tomorrow. In that time, the location is chosen and there is a rehearsal for the Tenniscoats’ performance at the opening, in parallel with a simple meeting I have with Gabija Grusaite, the moderator for the discussion on the second day. Preparation continues late into the night. Due to not being able to take hands away from the work, a catered meal is provided in a homely manner. I know from career experience that the day before the opening is always a rush, but I was extremely impressed by the physically demanding work undertaken by the staff of Hin Bus Depot and The Japan Foundation. They had scaffolding in place for high-place work until very late, for example. 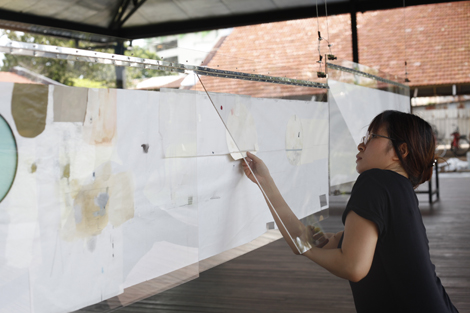 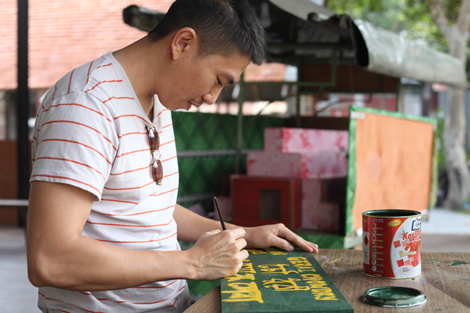 On June 6th, OPEN GATE opens its doors as the first day of the exhibition arrives. Hin Bus Depot seems to be a place where young people in Penang with artistic interests gather, and this exhibition that invited its director and artists from Japan appears to have also garnered attention. From a little while before opening time, the people who are waiting outside the gate are growing in number. In front of this audience, Sachiko M painted the title of the exhibition in large letters with white paint on the big black panel on the entrance. 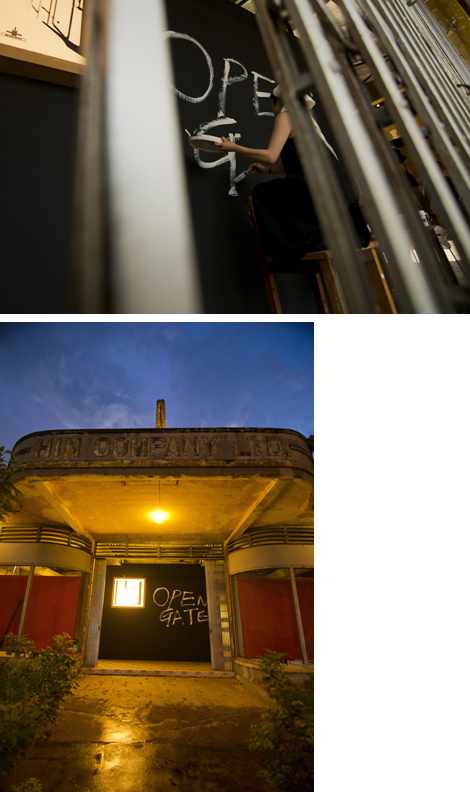 The audience starts to enter the lobby, but it is so crowded that it becomes full. Yonago’s work may not appear to be an artwork and differs from the prepared exhibition so there are people who don’t think it is an artwork at first but then realize and start playing with them. The gradual emergence of the audience reaction is fascinating.
With Mizuuchi’s work, he tied the large, doll-like objects made out of the black garbage bags to the seesaw, changing (or evolving?) to the point where the movement of the seesaw moves the bodies. However, there wasn’t much of a chance to actually move it. During this, Tenniscoats had begun their performance. In a corner of the lobby there is an area like an office, where the two of them hid in a loft-like space on the second level so that the people who entered had no idea they were there as the sound of their guitar and voices spread around. It was only understood that this was the beginning of the performance when the two came downstairs and walked around the venue as they performed. The audience followed them as they moved throughout the spaces. In two locations there are microphones and a PA, so the rest is natural sound. They hid in the grass, interacted with the artworks and mixed their repertory with spontaneous, improvisational sections which all related well with the venue. It could be said that the setting itself drew out this incredibly free performance from Tenniscoats. There was a prior announcement that there would be ‘avant-garde music from Japan’, which may have led to the considerable anticipation from the audience. Sachiko M also participates at the end, as the three perform together. Despite the meaning of the words perhaps not getting across, I think it must have appealed to many in the audience. 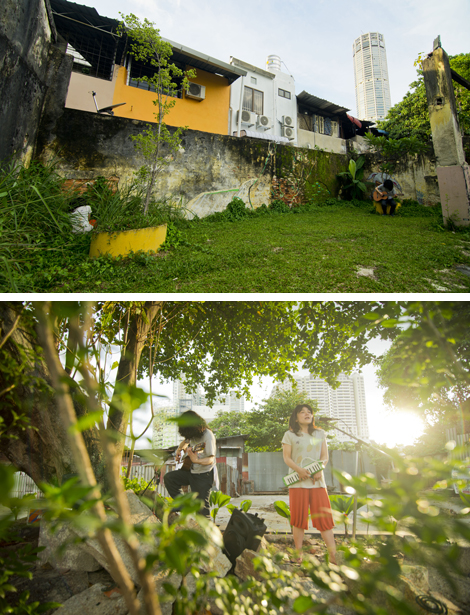 Arriving somewhat later than the artists who were already exhibiting, Chi Too from Kuala Lumpur carefully spreads bubble wrap on the floor. One layer is placed on another, then another, building up in thickness. He originally made paintings using the air filled parts of bubble wrap to create dots, so this could be a work that moves this material that the artist has an affinity with to a sound work. It creates the sound of bursting at your feet as you go into the venue through the entrance. This excellent idea impressed me. I could also sense a feeling of opening oneself up. 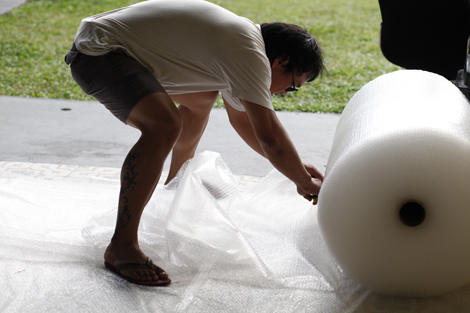 On the 7th of June, Gabija Grusaite, Annabelle Ng, Hoo Fan Chon, Sachiko M and myself held a discussion. After an introduction of the project by Sachiko M, and Gabija Grusaite modelated the conversation. To start with, the Chinese character for gate (門) was taken from Sachiko M’s writing to introduce the project, leading to a conversation about the word from the perspective of meaning as well as iconography. Indeed, the use of the character for gate in the design of the exhibition’s image may have strengthened its visual impression. For example, perhaps the realm of sound is beyond something like a gate, and symbolizes another world. In contrast to Grusaite who views the character as a kind of symbol for the world of sound, Sachiko M mentions in her introduction how the character is used to build up other characters, with an insight into when it is used with characters related to sound. This also comes to signify states that are unrelated to sound.
This would connect with various questions, such as how the artists respond to being given the space in Hin Bus Depot, how to establish a kind of site-specific relation as well as whether this could be a feeling that is shared between musicians and artists. On the other hand, Hoo Fan Chon states that his work is more relational than site-specific. He says he uses the word relational because he find the word site-specific uncomfortable because it has been used too often. There is certainly in his work an intention to establish a relation with the audience or situation through the work or process in his art. He also spoke of an affinity with Yonago’s work. The talk went into how changing society, relating to Joseph Beuys’ idea of social sculpture, is connected with the representational acts needed for creation, which then led to changing environments through sound and soundscape practices to change the sound environment. Afterwards, the second Tenniscoats performance was held. I strongly felt the significance of them playing at the opening.

On the 8th, at the tucked away venue, heavy rain falls from time to time. Mizuuchi’s work responds to this. The wind is strong, and might blow away the garbage bag giant. Chi Too layers on more bubble wrap. Ng also seems to be preparing to update her work. I could only be at the actual venue for four days, but by seeing the start of the exhibition, I thought a certain catalyst was definitely created by making an open gate and inviting the audience in. However, there should be debate about what this exhibition could be for each participant, beyond interactions and research. This was rather difficult to see at discussion on the 7th. I left Penang with high expectations for what results will be brought about in future processes by these participants and their art in terms of location, relations and of course as individual works.

Hatanaka Minoru / Born 1968. Chief curator at NTT InterCommunication Center [ICC]. Has been involved with the ICC since its opening in 1996. Exhibitions he curated include “Sound Art – Sound as Media” (2000), “Sounding Spaces – 9 Sound Installations” (2003), “Laurie Anderson: The Record of Time” (2005), “Silent Dialogue” (2007), “Exploration in Possible Spaces” (2010), “Vibrations of Entities” (2010), “Otomo Yoshihide: Between MUSIC and ART”(2014-2015), etc. Has also been planning exhibitions of Dumb Type, Maywa Denki, Laurie Anderson, Hachiya Kazuhiko and other artists, and organized numerous live concerts and other music-related events. 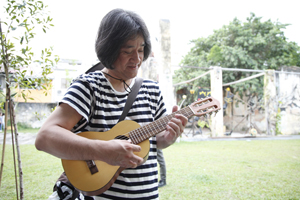